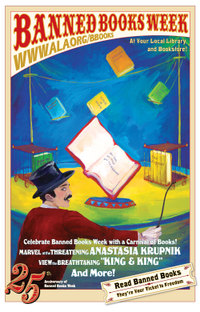 Banned Books Week is coming up September 23-30. The American Library Association, the week's sponsor, tracks the titles that people try to remove from schools and public and school libraries.

#1 on the 2005 Most Challenged list is It's Perfectly Normal, by Robie H. Harris. Here are the Top 10 challenged books, courtesy of the ALA. The press release also includes the reason for the book's challenges.

Thanks to the American Library Association for the poster image. You can even vote for your favorite banned book over at the ALA's web site.