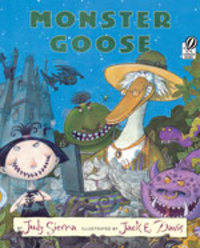 Goofy illustrations, icky adaptations of Mother Goose rhymes (that icky is a complement, by the way),  and a whole lotta humor make Judy Sierra's Monster Goose a swell Halloween read. (The art, acrylics and colored pencil on watercolor paper, is by Jack E. Davis.) Because the book is a take-off on poems many children have heard, young readers will be so in on the jokes.  One of the more, er, graphic works starts out, "There was an old zombie who lived in a shoe./She had so many maggots, she didn't know what to do." Another goes, "Sing a song of sea slime, sewer gas, and sludge." Ew, gross. Read more, Mom!

The roundup of other Poetry Friday participants is here at Chicken Spaghetti today. Please leave a link in the comments. Thanks!

Spanning the Kidlitosphere on Poetry Friday in which a bunch of bloggers post about pot'ry. I mean po'try.

Take your hall pass and visit A Year of Reading for Conference Comp Day Haiku.

Tockla's World of Children's Literature gives a shout-out to a beautiful feline with "The Owl and the Pussycat." Photo included!

Say welcome to Elaine in her first official Poetry Friday post, at Blue Rose Girls. Her original poem "Tyrannosaurus Rex, a Glutton for Punishment" gave me my first chuckle of the morning.

In honor of the new Cybils awards, Blog from the Windowsill sends us on a fun author hunt with "Are You A Book Person?"

A gorgeous new collection of La Fontaine fables is on the mind of Big A little a, who quotes from Ranjit Bolt's translation of "The Man and the Mirrors."

Is it raining in your neck of the woods, too? It's shorn the leaves off a lot of trees around here.  Kelly Fineman offers Thomas Hardy's "Autumn Rain-Scene."

Maybe what this rainy Friday needs is some magic. You can find "Fairy Bread," by Robert Louis Stevenson, at Little Willow's Slayground.

There's snow on the ground at Farm School, and here I am, kvetching about a little rain. Becky recommends two sources for Edna St. Vincent Millay's "When the Year Grows Old."

What is one of the reasons that Adrienne loves John Ciardi? Skip over to What Adrienne Thinks About That to find out.

Strasight outta the eighteenth century comes "The Fly," by William Oldys, at Susan Taylor Brown's Once Upon a Time...

I'd like to go sit on the lofty hill in "The Autumn," but I'd get mighty wet today. Instead, I'll settle for reading Elizabeth Barrett Browning's poem at The Family-Centered Life.

Some more school haikus are waiting for you over at Check It Out. Even the principal at Ms. Mac's school wrote one.

GottaBook's Gregory K. chimes in with a basketball poem, "Dunk!"

A Wrung Sponge contributes Joyce Carol Thomas's "Hide Me in the Cradle of Your Love."

Have you heard about the bodacious new lit prizes in town, the 2006 Children's and YA Bloggers' Literary Awards? Known as the Cybils, these honors will go to the best books of 2006. Anyone can nominate his or her favorite book of the year in many categories at the Cybils web site.

I am the administrator of the award in poetry. A few more people are needed for the two poetry committees:

This is your chance to participate. If you would like to serve on a committee, please leave a comment or shoot me an e-mail at c_spaghettiATyahooDOTcom. If you have questions, please ask!

Happy Diwali: A Review of Rama and the Demon King: An Ancient Tale from India
A Guest Column by Pooja Makhijani

As a child, I didn't have to wait until December for the holidays to begin. Some time around mid-October, my father strung twinkling strings of light around the two evergreen trees that framed our front door. My mother assembled boxes of decadent Indian sweets—barfis, laddoos, gulab jamun—for our family and friends. I mixed-and-matched multicolored bangles to wear with my various salwaar khameezes. All this, in anticipation of Diwali, the Hindu festival of lights.

Diwali celebrates the victory of good over evil, although the deities, rituals, and stories that are associated with the holiday are different in different parts of India. My family considers the third day of the five-day festival most auspicious; they believe on this day (which falls on October 21 this year) Lakshmi, the goddess of prosperity, visits our home. On this night of a new moon—the last night of the Hindu year—total darkness sets in the night sky. We place tiny clay lamps along our walkway and driveway so that Lakshmi can find her way.

Across much of north India, Diwali celebrates the homecoming of Ram, the seventh incarnation of Lord Vishnu. In brief: At the request of his jealous stepmother, Ram, the prince of Ayodhya, is banished from his kingdom with his wife, Sita, and brother, Lakshman. During their 14-year exile, Sita is abducted by Ravan, the ten-headed demon king of Lanka. Ram—aided by Hanuman and his army of monkeys—rescues Sita and slays Ravan. He returns home and is crowned king.

Ram's quest is chronicled in the Ramayana, one Hinduism's central texts. This 24,000-couplet poem was written in Sanskrit by Valmiki around 300 B.C., and has been translated into the vernacular. The best-known of these is Ramacharitamanas,  a 1597 translation in Avadhi, a dialect of Hindi, by the poet Tulsidas.

The epic poem has inspired countless cinematic and literary works; Rama and the Demon King: An Ancient Tale from India, written and illustrated by Jessica Souhami, is a particularly good picture book version of the story. She has succeeded in making this complex story accessible to a young reader, a near-impossible task. Ravana is deliciously evil and readers will be rooting for Rama and Hanuman. In addition, though suitable for children ages 4-8, the book doesn't shy away from the violence in the legend. I love the illustrations that accompany this retelling; they look like cut-tissue paper collages. Souhami, a shadow-puppeteer herself, has borrowed and employed traditional Indian artistic conventions with immense skill. She also really "gets" the Indian color palette. Check out that shocking pink on the cover of the book; I think I have a sari in that shade.

Outgrown picture books? Looking for something a little more substantial? For   middle-school readers, I recommend Rama and Sita: A Tale of Ancient Java, written and illustrated by David L. Weitzman. (Variations of the Ramayana can be found in many countries in southeast Asia, including Cambodia, Thailand, Burma, Indonesia, and Laos.) For teen readers, I highly recommend Ashok K. Banker's six-part series The Ramayana.

This month we’ve seen a spate of book awards, some of which have left us wondering: couldn’t we, the intelligent, savvy members of the kidlitosphere do better? Or, at least, differently?

So, we’re inaugurating our own book awards, honoring books published in English for children in 2006. Anne Boles Levy, of Book Buds, will launch a site this week and administer the awards process. What we need first is a name for this award, so we can get the award site up asap. One suggested name is The Belugas. Okay, that was my suggestion, but I suspect it’s a little weird. Anyone have a better idea? Head on over to Book Buds and make your contest name suggestion.

Click the link in this post's first paragraph and read about these to-be-named awards, and then come back! Because I need you. Yes, you.

The nominating committee will narrow down a list of suggestions for Best Children's Poetry Book 2006 to five, count 'em, five books. The judging committee will, yes!, judge the winner from those five.

Nominate yourself for either poetry committee. Use the comments feature for this post or email me at c_spaghettiATyahooDOTcom.

How's the Weather Up There? 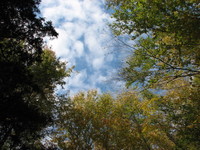 When visiting our town's nature center recently, I spied some interesting-looking books in its collection. One of them was The Handy Weather Answer Book, by Walter A. Lyons. Riffling through it, I could see lots of concise answers to questions young weather buffs might have. The book turns out to be one in a Barnes and Noble series, and right now it's not available from the online store. But I'm going to keep an eye out for Handy Weather, especially if it turns up on the B & N discount shelves.

My son also likes Super Storms, an advanced beginning reader in the See More series by Seymour Simon. Dramatic photographs enhance its appeal. Danger! Earthquakes in this same series is another good one. Look for paperback versions of these in the Scholastic catalogues or among the tchotchkes at the book fair.

From the Elmira (NY) Star-Gazette:

[Jan Brett] says her message to the children she meets on book tours is plain: Take the time to create something yourself.

"I tell them to turn off the television and listen to the voice within them," she says. "Don't listen to any other voices than your own. Then get your art materials out and create something wonderful."

In the newspaper article Brett talks about her latest picture book, Hedgie Blasts Off. I think that her advice works for adults, too. 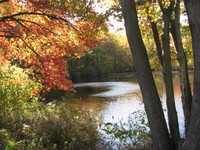 I now have a digital camera.

Back to children's books tomorrow.

Poetry Friday: Auden and His Housemates

One book I've been wanting to read for some time is Sherill Tippins's February House, which bears the subtitle "The Story of W.H. Auden, Carson McCullers, Paul and Jane Bowles, Benjamin Britten, and Gypsy Rose Lee, Under One Roof in Wartime America." Can you imagine! The New Yorker said, "Tippins’s book is a cozy, gossipy read, punctuated by solid, if perfunctory, literary criticism."

Talking about February House brings to mind the Auden poem "September 1, 1939," which was quoted often around the time of 9/11/01; thanks to the Academy of American Poets, you can read it online. It begins,

I sit in one of the dives
On Fifty-second Street
Uncertain and afraid
As the clever hopes expire
Of a low dishonest decade:

The house that Auden and the rest of the group lived in was in Brooklyn Heights. As a young man, my grandfather lived in a boarding house in Brooklyn for two years, which his family always said gave him enough stories for the next sixty-five. I look forward to catching up with February House in the near future.

To see a roundup of all today's Poetry Friday participants, visit Liz at A Chair, A Fireplace and A Tea Cozy. Don't you wish there was a virtual White Horse Tavern? It's almost time for Happy Hour.

Next week I will lasso all the Poetry Friday posts right here at Rancho Chicken Spaghetti.

Little House on the Road

I'm getting a chuckle out of following the blogger Poppins, her children, and her in-laws, on their mini-van journey around Laura Ingalls Wilder territory. Visiting one of the sites in some already-wintry weather, she comments,

The way the shanty groaned and shook as the wind howled around us was quite astonishing.  We were all struck by sober thoughts.  Except Matthias, since he was just happy to be running around chasing one of the farm cats. Some day the abstract concepts of the world will catch up to him, but until then he'll be a Zen-master of living in the moment.

My father read all of the Laura Ingalls Wilder Little House books aloud to me when I was a little girl. (Thank you, Dad!) Both of us loved the series. One of these days I hope to share them with Junior. Our current read-aloud is a [gag]Goosebumps[/gag] selection. (How did I get talked into that? Captain Underpants is Beowulf in comparison. Or, perhaps, The Canterbury Tales. I digress.) After this one, Junior will be free to read the next Goosebumps on his own. Or better yet: I'll get one of the new graphic versions, which TangognaT recommended, for him; I can see how comic-book illustrations would help. A lot.