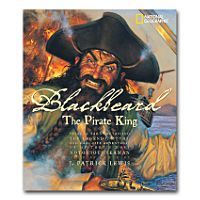 J. Patrick Lewis's Blackbeard, the Pirate King wins the award for longest subtitle: "Several Yarns Detailing the Legends, Myths, and Real-Life Adventures of History's Most Notorious Seaman." A pirate fan's delight, needless to say. My second-grader and I loved the swashbuckling art. Each poem is illustrated by full- and double-page spreads, ranging from N.C. Wyeth's "Duel on the Beach" to 18th-century reprints to 21st-century interpretations. In Howard Pyle's 1905 "Attack on a Galleon," the bigger ship glows golden as a rattle-trap pirate vessel sneaks up behind it. There's art history for the adults and wild drama for the children.

Lewis tells the famous pirate's story in a series of 12 poems, and because of the richness of its vocabulary, Blackbeard skews toward an older crowd, say, 7 to 12. I had to do a little explaining of terms as I read, but verses such as the following really capture a kid's imagination. It's from the poem "At Teach's Hole." (Blackbeard's real name was Edward Teach.)

The ghostly headless figure
Of Blackbeard, it is said,
Still swims under the moonlight
Looking for its severed head.

A helpful bibliography, author's note, and time line for Blackbeard's life give readers of these "tales of derring-do" even more resources for sailing along on a pirate theme. Highly recommended.

This one sounds great - I'll have to look for it!

Oh, do look for it. "Blackbeard" would make a grand birthday or Christmas/Hanukkah gift, too.

Oh, excellent! Pirates, legendary illustrators, and poetry! What could be better? Thanks, I'll look for this one too!

Eisha, I didn't remember that much about Blackbeard before reading the book, and realized, oh, that's what's up with all the pirate stuff around Charleston. (Blackbeard terrorized the East Coast and carried off a blockade of Charleston for a while.) I really enjoyed the book.

Once...a long time ago there was a female version of black beard.....in a far away land. From the distant horizon she could reel in ships just by casting her eyes towards the masts. They say that many a sailor died and casualites were innumerable.