Passage to India? A Guest Column by Pooja Makihijani

Passage to India?
A Review of Elephant Dance: A Journey to India
A Guest Column by Pooja Makhijani 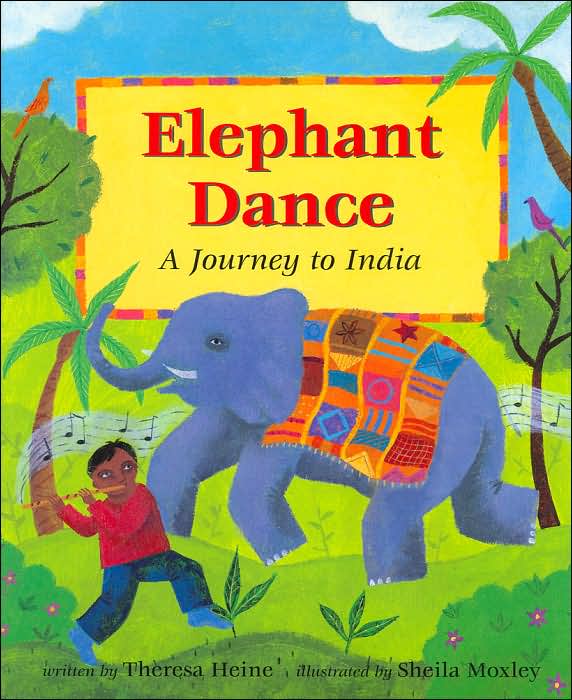 I shouldn't be so harsh; the book does have some redeeming qualities. But before I praise and criticize it, however, a brief summary. Ravi and Anjali's grandfather arrives from India to their (unspecified) country. Both children ask him question after question: "Is it hot in India?"; "Is there snow in India?"; "Have you ever seen an elephant?" Grandfather responds in colorful metaphors and entertains Ravi and Anjali with his stories.

Heine is a poet, and the book contains a number of beautifully crafted passages. For example, when Ravi asks his grandfather, "...What is the rain like [in India]?" Grandfather says, "The monsoon rain is like a curtain, silver like Anjali's bangles. It cascades like a waterfall from the sky, making many mirrors on the ground. Raindrops scurry to and fro like little silver fish." Both her choice of the word "scurry" and her repetition of the adjective "silver" are delightful.

Additionally, illustrator Sheila Moxley's colorful paintings are pleasing to the eye. My favorite spread is a dream sequence at the end of the book where sock-footed Ravi, bamboo flute to his lips, sees "the elephant dancing a silent dance."

Unfortunately, neither Heine's occasional literary flourishes nor Moxley's multi-hued illustrations are enough hide the flaws in this problematic book. The book employs every clichéd image of India: heat, rain, dust, tigers, dark brown villagers, cows, spices, elephants, maharajas, peacocks, snakes, monkeys, and mangoes. It is 2007; most readers know that India is more than just an impoverished, rural society or an exotic place for new-age types.

Both the text and the art treat India as if the country were a monolithic place. Ravi asks about "India" and Grandfather replies with definitive responses, as if the weather, vegetation, and wildlife were the same throughout the vast country. According to the CIA's World Factbook, the area of India is 3,287,590 square kilometers (slightly more than one-third the size of the United States) and has more than 7,000 kilometers of coastline. According to Wikipedia, India is home to 7.6% of all mammalian, 12.6% of avian, 6.2% of reptilian, and 6% of flowering plant species. India's forests ranges from tropical rainforests of the Andaman Islands, Western Ghats, and Northeast India to coniferous forest of the Himalaya. India is also home to 1,095,351,995 people who speak different languages (30% of Indians speak Hindi, the national language, but there are 14 other official languages in the country), practice different religions, eat different foods. Heine's descriptions of India are romantic and unparticular; Moxley's illustrations reinforce them.

The back matter of the book—"Living in India," "The Animals of India," "Food and Spices," and the musical score to Ravi's "Elephant Dance"—provides "a perfect introduction to Indian life and traditions" or so the publisher tells the reader. The endnotes, at best, paint India with broad brush strokes and offer a stereotypical, superficial view of the diverse country. Yes, the information provided in the notes is accurate, but without the necessary context, it's almost meaningless.

For a better—more precise—introduction to India, I recommend two brilliant picture books: Monsoon, written by Uma Krishnaswami and illustrated by Jamel Akib, and The Road to Mumbai, by Ruth Jayaveeran.

Pooja, thank you so much for the great column. You make a lot of good points.

As a reader can tell from the cover, the illustrations are bright and cheerful. The book does give a nice entry point for children in that kids are some of the main characters. But I, too, found that the view was superficial.

For everyone reading this post, what do you think makes a good children's book about another country?

As you know, I don't think that a writer or illustrator have to be from "inside" a culture to write about that culture. However, I do believe "outsiders" have to write or illustrate with care and SPECIFICITY (completely missing in this book. Not only is India generalized, the West is as well, as the reader has no clue where Ravi and Anjali live!) to convince a reader that he or she knows what he or she is talking about.

Pooja, I don't think that the tourist's-eye books work as well for kids because children often have no context for what they're reading (or being read). And, if the child happens to be from the country profiled, I would think she or he might find the generalities puzzling.

Great review! A good review is about bringing the positives and negatives out to light, and you've done it very well!

I read your comment on Fire escape about Saffron Tree, and it was a pleasure to know you think highly of the blog! I am happy it's growing in terms of its number of contributors - we have a blogcouple from India who wrote a review on My Friend, the sea - a dedication to the Tsunami victims in a way!

I plan to write about The Road to Mumbai! It was fun, but again, the snake charmer and elephants on the road was a bit of an overdoze of the same old story kind...Similar to what you've mentioned - there's lot more to India than these cliched stuff...Great illustrations, though...

I can't wait for your book on Mama's Saris to buy for my little ones. I got hold of "My mother's Saris" for my daughter - written by Sandhya Rao...Will write about that one too. Had very little text in it, which was a bit of a disappointment...

thanks once again for inspiring Moms like me with your books and reviews dealing with India.

Praba, Saffron Tree is a wonderful blog. I look forward to seeing MAMA'S SARIS on it soon!

Thank you for taking the trouble to review ELEPHANT DANCE. As a publisher of books that are set in cultures across the world, I am concerned to present those cultures in a way that is accessible to young readers, while evoking the traditions in question in a vivid and memorable way. In this story, the author set out to present India through the voice of a grandfather whose family in the west are not familiar with the it. I believe the children's questions are true to life - I have heard Tamil children ask similar ones of their older relatives on Air India myself! - and I think it is fair to say that the Grandfather IS specific in his responses -eg he specifies the characteristics of the wind from the western desert lands. Yes, the introduction is an overview, but this is the author's intention. In her favour, I would add that her images are very poetic and resonant. One can look at any culture's most distinctive characteristics from two points of view - an elephant can be said to be 'stereotypical'; equally, it is an ancient symbol of a great and ancient culture, and it is an animal small children are fascinated by,so why not include it? It is better, to my mind, to use accessible images than ones that are so unfamiliar and alien that they fail to capture the interest of the reader.
This book sets out to be an introduction to India as a whole; within the space of 40pp, I believe it achieves this in a modest way. To be sure, there are many Indias within 'India', but to hone in on one specific district was not the author's or the artist's objective.
In the end, a book rests or falls on its reception in the market and I am happy to say that this book has performed well in several countries and continues to do so.
Thank you again for your comments and I wish you every success with your own publication!
Best wishes
Tessa Strickland
Editor-in-Chief, Barefoot Books

Tessa, thank you so much for stopping by and telling us more about Elephant Dance. I'm very interested in books set in countries other than mine (I live in the US), and I know that Barefoot publishes a number of titles about children around the world.

Dear Pooja,
As author of Elephant Dance I wanted to make a few comments about your review.

The book is intended for young children. Ravi is five years old and the questions he puts to his grandfather are those of a five year old. He is learning for the first time about the exotic country to which he belongs, but has never seen. The story concentrates on animals, especially the elephant, the weather and food - things appropriate to children of picture book age. It is an introduction to India and hopefully will encourage children to look more deeply at the complex and varied nation. I am very aware that there are many geographical and culture differences, as well as languages and religions. I don't think reference to all these things would sit well in a picture book for young children. They like to hear about elephants.
With best wishes,
Theresa Heine