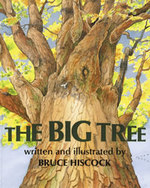 As I mentioned before,  Little House in the Big Woods is our latest read-aloud here at home. Although I didn't plan it, the timing is good because Laura Ingalls Wilder writes a lot about tapping maple trees and making maple syrup and sugar. That's exactly the season that our part of New England is nearing the end of. Last Sunday we went to a farm and saw the new-fangled shiny machine that has replaced the iron pot over the constantly burning fire for boiling down the sap. We may even get a chance to make our own maple candy soon; there's the possibility of six inches of snow before Saturday. (You boil down the syrup to a sticker version and then ladle it into a plate of snow, according to Mrs. Wilder.)

Ininatig's Gift of Sugar: Traditional Native Sugarmaking, written by Laura Waterman Wittstock, concerns a modern-day Ojibway elder who still practices the old ways of setting up camp in the sugarbush each spring to make syrup. Wittstock also recounts the story of Ininatig, the "man tree" who helped a family survive the end of a treacherous winter. With maps, drawings, and photographs, this book clearly demonstrates the old craft and lovingly portrays the community of sugar makers. I read this one aloud too, as it's a little difficult (and long) for the average 7 year old reader.

Ininatig's Gift is part of a series called "We Are Still Here: Native Americans Today," put out by Lerner Publications. I've heard good things about Children of Clay: A Family of Pueblo Potters, and I'm also interested in Clambake: A Wampanoag Tradition.

The Big Tree, written and illustrated by Bruce Hiscock, follows a maple tree over time from 1775 to the present.  You'll find tree-tapping descriptions in this colorful and appealing picture book, of course. By the way, we also like The Big Rock, and will hunt down The Big Storm and The Big Rivers, all by Hiscock.

Speaking of snow, I almost forgot to mention the delightful picture book Terrible Storm. Written by the late Carol Otis Hurst and illustrated by S.D. Schindler, it's a humorous account of the famous blizzard of 1888, which took place in, uh oh, March! Hurst tells it from the points of view of her grandfathers, who lived through the storm and told stories about it from there on out.

Please let us know if you do make maple syrup candy! I always wanted to when I was a child (OK, and still do) but unfortunately Queensland, Australia is not really the place to try it.

Oh, we Californites are SO JEALOUS. I am, anyway. Maybe we'll make maple sugar candy up at Tahoe next week... Every time I read that in the Little House series when I was little, I was DYING to try it. That's pretty much the only reason I wanted snow... Do let us know how it goes.

hey, Emmaco and TadMack. Fri. update: We have SNOW. It looks like we'll get a chance to try the maple candy.

I had not read Little House since I was a child, but the maple sugar stuff must have interested me way back then because I remembered some of Mrs. Wilder's descriptions. There were no maple tree and no snow in my suburban Southern backyard, though, to test it out!

we took the kids to see maple sugaring last year when we were at my parents house (in Massachusetts) and they loved it - something that they can't see here in Atlanta.

What about "Miracles On Maple Hill" by Virginia Sorenson? I am re-reading it right now for the gazillionth March in a row (the first was out on the fire escape in Flushing, Queens).

Kathy, thank goodness for kids; it's fun to see these things, isn't it?

Mitali, that's a new one for me. Excellent!

Oh no, this is making me hungry. Making maple syrup and sugar was one of my favourite bits of LIW when I was little - so magical and exotic (to us here in the UK) - I'd so love to try making it some time.

Zoe, growing up in Mississippi, I felt the same way--I was very intrigued by the whole thing.