There's a Volcano on My Bookshelf 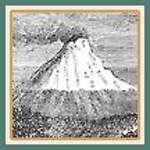 What did one volcano say to the other?

Ha, ha, right? My 7 year old used to tell that joke often, laughing every time. He is a volcano guy from way back. Here are some books that other young vulcanologists might appreciate, too.

Why Do Volcanoes Blow Their Tops? by Melvin Berger. Picture book, lots of facts, Q. & A. format. Includes directions for making a grand baking soda/vinegar/dish-soap explosive concoction using an empty soda bottle. Because of this book, "magma" has been a part of my vocabulary for the last four years.

Hill of Fire, by Thomas P. Lewis. Illustrated beginning reader about the farmer who stumbled across a volcano (the beginnings of one) while plowing. About the 1943 eruption of Mexico's Paricutin. A Reading Rainbow selection.

Volcanoes, by Stephanie Turnbull. From the Usborne Beginners series, a nice introduction to the subject, short bits of text, index, glossary, recommended web sites—all in 32 pages.

The Magic School Bus Blows Its Top: A Book About Volcanoes. You can't go wrong with Ms. Frizzle, the extraordinary science teacher, and her class.

An Island Grows, by Lola M. Schaefer. A colorful picture book for preschoolers and early-elementary kids. (Recently reviewed at the blog Charlotte's Library.)

Magic Tree House #13: Vacation Under the Volcano, by Mary Pope Osborne. Early chapter book about Pompeii, from the popular series.

Volcanoes! by Jeremy Caplan. Another advanced beginning reader, with photos.

Volcano, by Nicholas Harris. Pompeii from the Ice Age into the present, with tabbed pages. Picture book for older readers. Part of a series called Fast Forward. Vesuvius included, of course.

We have the Magic School Bus about the oceans and it's great. I'm putting the Volcanoes on Seth's birthday wishlist. Thanks!

Oh my word, the Magic School Bus volcanoes book is one we have read at least 400 times. Your son will love it!

Susan,
My daughter's a volcano gal herself. How about tsunamis? Since the big one hit, have you seen a good children's book on that? I don't think I have. And thanks for the sweet KIMCHI reference to your son's librarian!

There's a great new picture book out from Houghton Mifflin called "Tsunami Warning" by Taylor Morrison. It's actually about a 1946 Hawaiian tsunami that prompted the U.S. gov't to start its warning program that's now being adopted around the world.

I'm looking forward to renting the old Krakatoa movie at some point, too. Rose, we liked "Selvakumar Knew Better," by Virginia L. Kroll, a picture book about a dog who rescues his family during the recent Indonesian tsunami. It's more relationship-oriented as opposed to weather-oriented.

Anne, Taylor Morrison is excellent. I'll have to look for "Tsunami Warning." Thanks!

I have some great Volcano Books listed here along with some activities! We had a grand time with our Volcano study, thanks for your list!
http://happyheartsmom.typepad.com/sweetness_and_light/2007/02/volcanoes_are_e.html

Interesting. I recently illustrated the cover of a young adult book about Mt. Vesuvius and Pompeii. It is "The Last Girls of Pompeii" by Kathryn Lasky and Viking is releasing it in May.
It is a clever approach that merges fact and fiction about the famous eruption that destroyed Pompeii in A.D. 79. I really enjoyed it.

Cynthia, I'll look for that one; thanks for the heads up. Kids (and adults) are so fascinated by Pompeii, aren't they?

I just filmed a Volcanoes booktalk from inside the Haleakala crater on Maui Hawaii. I will be uploading it soon, so feel free to check out Bookwink.com in the next week or so for more volcano books!