The Natural History of Uncas Metcalfe 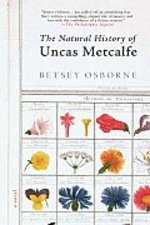 1.  While Betsey Osborne is a friend of mine and a colleague from the days when I worked in an office full of cut-ups, she certainly didn't ask me to review her novel here or elsewhere.

2. I love this book, and I'm sorry that it ended because now I don't have it to read any more.

Uncas Metcalfe is a 65-year-old professor of botany in upstate New York, and for a person who does not like change, it's everywhere he looks. His emotional, "exhausting" (and very funny) adult daughter has returned to town, accompanied by her growing family, and then Margaret, his wife of many years, breaks her leg in a freak accident, which leads to a longer than expected convalescence.

Uncas's hometown, which he left only briefly before returning, is on the wane, as well. "The physical upheaval and near abandonment of the heart of Sparta over the last forty years were in sharp contrast to the occasional hiccup in his own life, which was absorbed with little fuss by the resilient stasis he had achieved."

Margaret's absence from much of Uncas's daily life leaves Uncas unmoored. Two young women, whom he knows from town, step in to help out at home, and become part of the novel's rich cast of characters. Some of my favorite scenes, though, involve the private and witty repartee of Uncas and Margaret; through these scenes, the reader glimpses what could be on the verge of being lost. A melancholic air that reminds me of Kazuo Ishiguro's Remains of the Day and an unexpected encounter combine for an emotionally resonant ending. If reserve extracts a price, surely Uncas pays it.

I have included the assured, beautifully written Natural History of Uncas Metcalfe in the "Under the Radar" tour because I am surprised that the New York papers missed it the first time around. There's still time, though; the paperback just came out in May.

You are welcome! I just love it, Wisteria, and hope you do, too.

P.S. I think half the books on my Hold list at the library came from your Google Reader suggestions. Is that where I first read of "The Year of the Goat"? Possibly! I hope to review that one later this week (not as part of the Radar tour).

Yet another book to add to my list! Most of the books I've added lately are recommendations from you!

I just started "Animal, Vegetable, Miracle" yesterday and I just love it. Next you hear from me, I'll have run away from NYC and I'll be living off the land in Virginia, or something. Or maybe I'll just move out to Long Island instead.

This is so dangerous for my to-be-read pile, which is way past toppling over, but this sounds so good. Thanks!

Sounds good, even though I don't often read books for grown-ups!