Tracey Campbell Pearson's Bob is the best picture book about animal sounds that I've read in eons. In her picaresque cumulative tale, the author-illustrator balances vivid art, memorable characters, and comedy. Bob the rooster is in search of a voice—a crow, in fact. But how to? The path to cock-a-doodle-do-dom takes some twists before he finds the ideal instruction. A cat named Henrietta tells him how to meow, some cows tell him how to moo, and so on.

At one point Bob stands  alone in some deep-dark woods, far from home, feeling sure someone is following him. 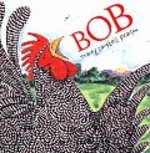 Bob eventually meets the right teacher—on the road, no less—and what Bob makes of his entire education leads to a final, goofy scene of triumph.

Pearson's detailed pencil-and-watercolor illustrations work hand in hand with the text, adding humor and enhancing character development. The greens of a country summer, the herringbone pattern of Bob's black-and-white feathers, and the pale blues and purples of sunrise, among other hues, highlight the warmhearted nature of this story.

Oh!! I hope Lemuria has this book. My niece is having a birthday at the end of the month. I love the cover, probably because of my chickens. Thanks!

That "whooo" bit had me laughing, Wisteria. I really loved the illustrations; the artist/author took such care. As you can tell, Bob is a beautiful Plymouth Rock--just like our Bossy and Petunia! I hope Lemuria has "Bob," too, though it is an "older" book.

I LOVE THIS BOOK! The "Bob Bob" whispers crack me up every time.

By the way, ever seen Naomi Shihab Nye's lullaby book with the chicken in the window? I thought of you all!