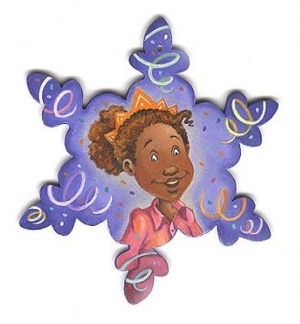 Robert's Snow for Cancer's Cure is an online charity auction of some 200 snowflake art pieces created by children's book illustrators. The proceeds from the auction go to cancer research at Boston's Dana-Farber Cancer Institute. Won't you put in a bid? They make excellent, one-of-a-kind gifts. Visit the Robert's Snow/DFCI web site to see the particulars about buying the snowflakes.

Marion Eldridge's snowflake, Shanté Keys (left), goes up for auction starting Monday, Nov. 19th. I am so pleased to feature it here at Chicken Spaghetti as part of the Blogging for a Cure initiative.

Marion Eldridge has illustrated over 40 books for children. She has worked for both trade and educational publishers. She has a daughter, Kate. Marion lives in  Massachusetts with her husband, Paul, and their little dog, Tam-O-Shanter, who keeps Marion company while she is working.

In addition to adorning a snowflake, Shanté Keys stars in Shanté Keys and the New Year's Peas (Albert Whitman & Company, 2007), which Marion Eldridge illustrated and Gail Piernas-Davenport wrote. Their joyful picture book celebrates family, community, and diversity. It imparts a few facts about New Year's customs in different cultures as Shanté goes from neighbor to neighbor looking for a missing ingredient for her family's feast. (Eating black-eyed peas for good luck on New Year's Day is an African American and Southern U.S. tradition.) Marion and I chatted via email recently.

1. What were some of your favorite childhood books?

I loved The Golden Egg Book by Margaret Wise Brown, illustrated by Leonard Weisgard. I still have a copy, though not the one I had as a kid. I've remembered it vividly my whole life. My parents did save some pop-up books that were mine when I was little. One is called Playtime in Action. Another is Christmas Time in Action. They are quite elaborate pop-ups of whole scenes. Very impressive! Both were illustrated by William Kemp Tilley, with a copyright by Walter P. Phillips. I'm so glad my parents saved these for me! They are a lot of fun and bring back many warm memories. They are quite a contrast to the books that kids have now! 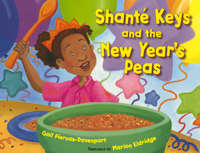 2. Children are going to love Shanté Keys and the New Year's Peas. With its bouncy, rhyming text, the book is such fun to read aloud. I can imagine a kindergarten class chanting along. Shanté herself is adorable and looks someone you'd want to be your friend. Did you use a model or have someone in mind when you created the illustrations of the little girl Shanté?

I love the bouncy, rhyming text too! And I'm so glad if you'd like Shanté to be your friend! I feel the same way. I would miss her and the other characters in the book, but they share my studio now. It's great having them around! I didn't use any models or reference photos for Shanté or the other characters. They came completely from my imagination—with inspiration, of course, from the text. For me, creating the characters is one of the most fun parts of illustrating a story. In general, I just try to observe people a lot and occasionally browse through photographs online to get ideas, but then I put it all aside and just draw.

3.  Here's an image from the book. Would you tell us about this picture? What's going on at this point in the story?

This was a terrible moment for Grandma, but a fun scene to illustrate! It's the moment when Grandma realizes that she's forgotten the black-eyed peas! As written by Gail Piernas-Davenport in the book:

It's a dramatic scene—everyone shocked and surprised! But, I tried to soften the blow a little for Grandma by putting Shanté's Dad's arm behind her as though he is offering support.

4. Are there going to be further adventures of Shanté Keys? She's a natural for a series.

There are no plans that I know of. Of course, that is up to the author, but I would love it! For now, Shanté is participating in Robert's Snow for Cancer's Cure. Gail had some wonderful things to say when she found out that Shanté was involved in Robert's Snow. You can read about her reaction on her blog, Writing from the Lemonade Stand. I just loved what she had to say!

Thank you, Marion. Readers, don't forget to click over to the Robert's Snow site and bid in November! Featured at other blogs today are snowflakes by Carin Berger, at Chasing Ray; Sophie Blackall, at not your mother’s bookclub; Erik Brooks, at Bildungsroman; and Brian Lies, at Greetings from Nowhere. 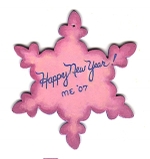 Great interview! I never had black-eyed peas until I moved to VA (from PA) ... I was skeptical, but ... mmmm! I feel Grandma's pain!

Very fun! Love Shante (don't know how to get the accent on her e) and I love New Year's traditions!

A new year CANNOT start without black-eyed peas. And they are excellent with bar-b-que. And in quesadillas.

I love that crown on Shante's head on the snowflake.
And that's a great scene from the book. Mercy me, indeed!

Thanks for this interview with Marion--and for the peek inside the book. It sounds like a great story to read aloud.

I LOVE Shanté! Part of the very real fun of this snowflake series is finding new picture books! (Yes. Jules is finally turning me into a fellow PB Nerd.) I hated black-eyed peas, growing up, but they were ubiquitous and present at all those after-church meal celebrations. Drama without them for sure!

Thanks for the intro to someone else fabulous! And I echo the hope that Oprah will love her, too!

I've gotta find that book. I love the look on Shanté's face in that spread you shared.

Thanks so much, Susan, for participating and for the great write-up. That's a great snowflake!

Jules, a Southerner who has most certainly heard about corn bread and black-eyed peas on New Year's Day

Great snowflake! I like that it's a New Year's one...

I'm stubbornly clinging to my family black eyed peas at New Years tradition, despite having lived in New England for years...

Enjoyed reading about Marion and Shante! Thanks for the lovely feature.

What a great snowflake, and I love the style of Marion's illustrations. Will have to look up her books. And black-eyed peas? Ew. ;-)

Thanks for a great interview. I did not know about the black eyed peas tradition, so I have learned something new today!

Hey, everybody! I'm glad you stopped by to see Marion's art for Robert's Snow. I just love it. As a former Southerner, I eat black-eyed peas on New Year's Day, too; last year I added a LOT of salsa to perk 'em up.

Susan, thank you so much for the fantastic job you did for Robert Snow, for Shante and for me! Thank you also to everyone who left such kind comments! The terrific post and lovely comments were very heart warming and much appreciated! This has been a great experience! Thank you all so much!

What a wonderful book, with great illustrations. My son and I have read the story many times and we seem to enjoy it more every time we read it!

The snowflake is so lively and festive! Thanks for a great interview.