'Home again swiftly I glide,
Back to my beautiful bride.
She'll not feel so rotten
As soon as she's gotten
Some cider inside her inside.'

That's the first verse of a jaunty little song in Fantastic Mr. Fox, a classic by Roald Dahl. When he sings the song, Mr. Fox and his friend Badger have just secured a big feast's final ingredient, some fermented cider from a farmer's secret cellar.

Badger's first taste of the cider cracked me up.

'It's my turn,' said Badger, taking the jar and tilting his head well back. The cider gurgled and bubbled down his throat. 'It's ... it's like melted gold!' he gasped. 'Oh, Foxy, it's ... like drinking sunbeams and rainbows!'

The whole book is like that, one delightfully funny scene after another as Fox and his friends outwit their vengeful human neighbors. "I'm on the foxes' side. Are you?" Junior asked me as I read the novel aloud this week. Yes, absolutely.

Featuring many amusing line drawings by Tony Ross (in our edition; Quentin Blake, et al., did others), Fantastic Mr. Fox is a great choice for kids eight and older. Readers who like short, exciting chapter books will be thrilled.

Two Writing Teachers have the Poetry Friday roundup on the table today. Enjoy it with your own glass of sunbeams and rainbows.

The Child_Lit Listserv—a virtual hangout for authors, academics, editors, and other enthusiasts—is always percolating with fascinating and useful information. Recently Craig Svonkin asked for suggestions of  "multicultural fantasy" works, and Child_Lit participants came up with a slew of recommendations.

I publish the list with an a-okay from Craig, an assistant professor at Metropolitan State College of Denver, specializing in children's (and American) literature. He's interested in additional titles, too. So, use the comments section and chime in with your ideas; you can also email Craig directly at <csvonkinATmscdDOTedu>. (Replace the AT and DOT with the real things.)

Many thanks to Prof. Svonkin and the others at Child_Lit for this list. Any notations are from that lively, engaged group. (I added links to several online retailers so that readers could see the books.)

This Book Belongs To... 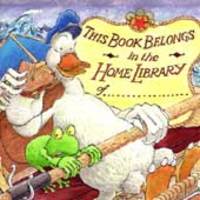 When the author Anne Fine was the Children's Laureate in the UK, she started a project that encouraged children to build home libraries, and enlisted well-known children's book illustrators to design bookplates, which were then offered for free online. You can still download these artistic gems from the web site My Home Library. You'll find black and white plates by Quentin Blake, Shirley Hughes, Nick Sharratt, and Debi Gliori, to name a few, and color plates by Jez Alborough (pictured, right), Aliki, Helen Oxenbury, Tony Ross, and many others. My Home Library features printable bookmarks, too. All are for non-commercial use, of course.

At My Home Library, Anne Fine suggests to children,

If you have to get a present for your brother, sister or best friend, and you're not feeling rich, then think about using one of our bookplates to personalise the perfect choice of book from a charity shop or second-hand book shop. They're brilliant for blotting out the last person's name. (In fact, they're so good that more and more bookshops are giving them out free - or is it in the hope customers will buy more books just to have something to stick them in?)

Everyone needs a Home Library. Make sure that yours keeps growing. Don't forget that books furnish the mind, and unfurnished minds are EMPTY and TIRESOME.

I love the My Home Library site and the bookplates and the whole very green idea of buying gifts at the thrift store. A number of our Goodwill finds sport My Home Library bookplates. So, that's my tip of the day!

"This Book Belongs To..."  is part of the November Carnival of Children's Literature: Tips Edition, hosted by the effervescent MotherReader. (If you're wondering what a blog carnival is, don't fret. I wrote an explanation a while back.)

As member of a nominating committee for the Children's and YA Bloggers' Literary Awards, I want to call your attention to the long list of Middle Grade/Young Adult Nonfiction Books under consideration. Our committee will winnow down this group to five titles only. Then the judging comittee takes over. Which of these will win the top prize?

This post, with all the book titles, continues after the jump.

Posted at 09:54 AM in Intermediate Readers, Young Adults | Permalink | Comments (2)

Baby, You Can Drive My Car

Earlier in the fall the proprietor of AskPatty.Com, which dispenses "automotive advice for women," mentioned her top ten children's books about cars. I was thinking about that list this week because I need to buy a baby shower gift. #1 on Patty's list is the classic Cars and Trucks and Things That Go, one of my son's all-time favorites. I'm going to include that book in my shower package.

My friend MJN reminded me of the car list; she blogs at The Alternate Side Parking Reader, which concerns the adventures of car ownership in New York. And if you think that squabbles over parking places don't get ugly, then read the post "Spot of Guilt." Whew! 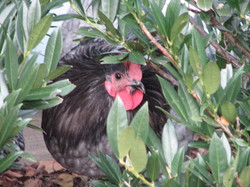 The wild turkeys who visited earlier this week have ventured into our yard often this fall. They're not full-sized, so I'm guessing they are last summer's babies. Although they eat grain that was accidentally dropped on the ground near the coop, the chickens, for the most part, pay them no mind. I wonder, though, if the chickens were out free-ranging and the turkeys came by, would the chickens decamp with them? Sort of like running away with the circus? I hope not. Our guys have been very good about their curfew, returning to their coop when it gets dark.

The hens are now about six months old, but so far they have not laid any eggs. I check every day. Zeno the Rooster crows all the time; he has gotten very big and is quite a beauty, as is his sister, Fuzzy. She is a light gray color. One set of neighbors now owns a puppy who barks a lot, so maybe her barking has masked the crowing. No one has yet complained. Petunia and Bossy, the Barred Plymouth Rocks, remain the friendliest of the group and the first to snatch a snack when it is offered. Somehow all of them have become enamored of string cheese, and will come running over if they think we have some.

I always like to mention a chicken-themed picture book when I talk about the flock on Saturdays, and the selection today is Goodnight Lulu, by Paulette Bogan. The chuckle-inducing art—done in watercolors and ink—features an array of irresistible crayon-box colors, and all the spreads are big two-page affairs. Finding it hard to settle in for the night, Lulu, a wee chick, expresses her fears to Momma Chicken.  "What if a big, brown bear comes in while I am sleeping?" Lulu wants to know.  The next pages show a fierce Momma, eyebrows knitted, going after such a creature. "Then I would flap and cluck and scare it and chase it all the way back to the forest where it belongs," Momma says. Lulu imagines more frightening animals, and Momma reassures her every time.

As a comma enthusiast, I am bothered by the lack of one between "Goodnight" and "Lulu" in the title, and in general think the copy-editing could have been tweaked in this picture book. But the story is fun, and the repetition of the lengths that a mother would go to protect her child makes this a swell choice to share with preschoolers. Sometimes my son reads aloud to the backyard flock. I wonder what they'll make of this one. I hope it will dissuade them from running off with turkeys.

I am verse-less, which is not the same thing as verklempt, this Poetry Friday, but I direct readers in search of a good poem to the Poetry Friday roundup. It's at Susan Writes, the blog of author Susan Taylor Brown. Next week I'll return with verses in hand. Meanwhile, you should also check out the 2007 kids' poetry books nominated for a Cybils award. The longlist is here. The one I most want to read is Oh, Theodore! Guinea Pig Poems, which Laura Purdie Salas reviewed recently at her blog.

The New York Times Book Review will commit its 100 Notable Books of the Year to print soon, but you can read the list online now. This lineup does contain one novel for children. Can you guess what it is? A nonfiction selection also contains the word "bloggers" in the title, but I ain't tellin'. Click away.

On Monday nine wild turkeys showed up on my patio.

"You're early," I told the assembled crowd. Eventually they strolled off, not even bothering to gobble.

They did not return today.

My consciousness-raising group is still going on. Every Monday night it meets, somewhere in Greenwich Village, and it drinks a lot of red wine and eats a lot of cheese. A friend of mine who is in it tells me that at the last meeting, each of the women took her turn to explain, in considerable detail, what she was planning to stuff her Thanksgiving turkey with. I no longer go to the group.

New blog! Welcome to Donalynn Miller, who writes The Book Whisperer for Teacher Magazine. The 6th grade teacher from Texas is the author of the series "Creating Readers," which ran at the magazine earlier this year.

What's your tribe? Authors offer opinions on "brown books" and the multicultural label, at the blogs Finding Wonderland and Mitali Perkins' Fire Escape. By the way, I hope you read A. Fortis's interview of Sherman Alexie (source of the "tribes" reference) at Finding Wonderland; it's a gem.

Nominations for the Children's and YA Bloggers' Literary Awards (the Cybils) close today. Go forth and nominate.

Karen MacPherson lists books for reluctant readers (apparently middle-school boys, to judge by her choices) at the Pittsburgh Post-Gazette.

Don't miss the first round of bidding at Robert's Snow, the online charity art auction at the Dana-Farber Cancer Institute.

School Library Journal chooses the best books of 2007. (via A Fuse #8 Production)