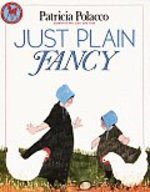 If you're stopping by here for the first time, welcome. I usually write about children's books and other literary matters, but on Saturdays I talk about chickens, too. With a small coop in the yard since last summer, I have been documenting my son's and my adventures as suburban chicken-keepers. And to stay helpful book-wise, I include picture books featuring barnyard fowl as part of the post.

I picked Patricia Polacco's Just Plain Fancy as today's book. It has a neat setting: the Amish community in Pennsylvania. Two young sisters find an unusual egg in the pasture and put it under their hen to incubate. But they misunderstand some adult rules, and become very worried about their flock's unusual new hatchling. Polacco writes with empathy about children's fears and other emotions, all the while telling an engaging story. This book is a third-grade read-aloud at my son's school, and like the rest of Polacco's work, the reading level is at least that grade or higher.

If you'd like to hear about our backyard chickens, keep reading after the jump.

When I wrote about the flock last month, we had lost two hens to a predator (most likely a coyote),  we'd found another chicken at a neighbor's that same week, and the rooster who used to be named Loretta was crowing all day long. Through a chance conversation at my son's school, I discovered that a family around the corner also owns chickens. So I called and asked if they were missing a bird (i.e., the rescued hen we'd named Brownie). Why, yes, they were, and they came over within minutes to pick up their escapee. She was missing all of her tail feathers, they told us after taking one look at her. She'd obviously had a close call with something. Junior and I were happy to have located her people. We only had Brownie for a week, but she cheered us up a lot.

Bossy and Petunia the Barred Rocks never reappeared, sadly. Well, I knew one wouldn't (don't ask...details grisly), but I was hoping the other was just lost and seeking her way home. After the coyote incident, when we were down to two, I knew it was time for more changes. Namely, the former Loretta needed new surroundings with plenty of space—where no one would be bothered by a rooster who liked to sing, as they say in Spanish, the whole day through. El gallo canta mucho. A few phone calls, a couple of days, and a wee bit of stress later, the rooster moved to a rural setting much better suited to his continuous musical talents. Whew! Remaining was one lone hen, Fuzzy. How would she cope without her brother? Did she miss the racket and his, er, affectionate attention? I kept an eye on her the day he left. First she stretched out and took a sunbath. Then she had a bite to eat. Before the week was up she had laid her first egg. Fuzzy was okay.

Still, since chickens are social by nature, Fuzzy needed a new roommate. Soon she'll have one. Junior and I drove an hour and a half to a poultry show in Massachusetts and came home with a year-old hen. Mostly we had wanted to see all the pretty and unusual birds, though we did pack a pet carrier, just in case. The new chicken is a white-crested black Polish, and she sports an awesome hair-do. She and Fuzzy live in separate coops right now. Actually the new addition lives in a big parakeet cage, and frankly, she looks embarrassed. Junior's dad and I need to move the coop to another part of the yard, and when we do that, the new hen will move in with the old one. 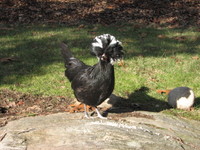 At this point in time, things have calmed down, and we gather an egg from Fuzzy each day. I'm hoping to enjoy a few weeks free of chicken drama. Stay tuned.

Hooray for Fuzzy! And woo-hoo to Fancy Nancy (you didn't provide me with a name, so I've provided my own)!

Lovey is ADORABLE. I love a chicken with a good hairdo!

I'll have you know, we're all living our chicken fantasies through you.

Wow. A poultry show. Could you ever have guessed THAT was in your future? Hallelujah for life's big and little surprises!

Tanita and Mary Lee, I wish you could see the new addition, Lovey, in person. She's so sweet, and so cool looking with the hair-do. The Polish breed tends to be very docile because they can't see that well--all those feathers in their crest get in the way. And, yeah, a poultry show! Can you believe it! I should have taken some pictures. There were row after row of cages of chickens. There were lots of bantam (miniature) chickens, including some roosters not much bigger than parakeets. Strange to see them crow.