Want some quick suggestions for a children's book? Check the following, which have plenty:

The March Carnival of Children's Literature, at Scrub-a-Dub-Tub, the Reading Tub Blog

Facts First! Nonfiction Monday, at Picture Book of the Day

Please pardon the technical problems that this site has been experiencing over the last few days. If you have tried to comment and were not able to, it is because of the glitches, not because I don't want to hear from anyone! I hope that the difficulties will be resolved soon by Typepad, the blog host, which has been quick to respond to things in the past.

Enjoy the weekend. It's a beautiful sunny day here in southern New England, and the backyard chickens are calling my name. Earlier this week Junior and I had a picnic in the yard, near their coop. Because the two hens are so food-oriented, they were not invited. Through the fencing of their run, they watched us eat, and if there is a chicken equivalent of cussing, we heard it for our entire lunch. Much staring and irate gobbling were lobbed in our direction. So now I better make it up to the girls by letting them out for a bit.

The Lion, the Witch and the Wardrobe is the current read-aloud here at home, and the 8 year old and I like it quite a bit. I'd not read it as a kid, and though I find a few parts over the top, Junior does not. It's a longer book than he would tackle on his own; when he reads a chapter book, he prefers Goosebumps and other thinner novels. But he's perfectly happy to hear C.S. Lewis's classic at bedtime, and always wants to keep going and find out what happens next.

For those who don't know the book—which Lewis called a "fairy tale"—it takes place during the the early years of the Second World War. During the bombing of London, four children are spending the summer away from their parents, in a big house in the country. They enter a magical, if troubled, kingdom through a wardrobe closet in a spare room. Good and evil forces are struggling for the control of the kingdom, which is called Narnia, and the four siblings are pulled into the fray immediately. My son certainly does not pick up on all the Christian overtones that an adult would.

The inhabitants of the troubled realm await the return of Aslan, a lion and the head of the good side, and that's the tie-in to Poetry Friday. Some beavers tell the children of an old rhyme popular in Narnia:

Wrong will be right, when Aslan comes in sight,
At the sound of his roar, sorrows will be no more,
When he bares his teeth, winter meets its death,
And when he shakes his mane, we shall have spring again.

Picture-book lovers should take a look at Hiawyn Oram's adaptation of The Lion, the Witch and the Wardrobe, which features beautiful illustrations by Tudor Humphries.

You can find links to other Poetry Friday posts today at the blog Cuentesitos. For an explanation of the whole Poetry Friday phenomenon, see this article at the Poetry Foundation. 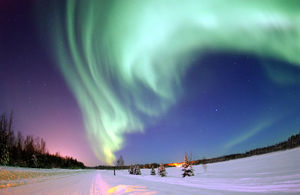 "Celebrity scandal and Anne Frank: the reading diary of British teenagers," at the Guardian.

"Interest Led Learning, 'All Boy' Style." at Life Without School.

The Litblog Co-op closes up shop, at The Reading Experience. (via Critical Mass)

Nikki Grimes on Oh, Brother!, in the OC Register

A roundup of chicken books for kids, at Powell's Books.

Children's book festival at the University of Southern Mississippi, April 2nd-4th, with Pat Mora, Kimberly Willis Holt, and others.

Cecily von Ziegesar (author of the Gossip Girl series), in the Telegraph.

Chris Lehmann on Margaret Seltzer's Love and Consequences, at The Nation. (via GalleyCat)

Author David Schwartz on poetry in kids' nonfiction, at I.N.K.

A- for The Ten Cent Plague: The Great Comic Book Scare and How It Changed America, at Entertainment Weekly

O, Canada! A Celebration of Canadian Books: "Rink of Dreams"

Around the children's book corner of the blogosphere, you'll find many posts on books from Canada. Organized by Colleen Mondor, the "One Shot World Tour" roster of participating blogs can be found later today at her blog, Chasing Ray.

Canada's national sport figures prominently in Rink of Dreams, a novel by Nancy L.M. Russell (Key Porter Books, 2005). It's the first year on an elite hockey team for Gary MacDonald, an eighth grader who must contend with not only a bullying teammate but also his parents' separation.  Luckily for Gary, a minor league hockey team moves to his town on Prince Edward Island, and his family befriends a rising superstar from Russia. Wallace touches on a lot of subjects—unnecessary violence in sports, steroid use, the loss of Canadian hockey teams to the U.S., the Russian mob—to keep her readers' attention, but the primary action lies in the evolving relationships between the main characters. As Gary contends with the many events of a pivotal year, he grows up emotionally. 11- to 14-year-old sports enthusiasts who favor books with plenty of plot constitute ideal audience for Rink of Dreams.

Posted at 07:55 AM in Intermediate Readers, Young Adults | Permalink | Comments (4)

What Are They Reading at the White House?

Children's Book Week Coming Up In May

Children's Book Week takes place May 12-18. In celebration, the Children's Book Council, a trade organization of publishers—and the sponsor of said week—is collecting votes for the first annual Children's Choice Book Awards. A pre-selected roster of bestselling authors & illustrators and new-ish books is on the ballot, and kids can vote online themselves or with the help of a grownup. Contending for Favorite Author are the following:

Details on voting can be found here.

The poster is by Mary GrandPré. (She's the Harry Potter illustrator, for those who don't recognize the name.) You can order a free poster and an activity guide from the Children's Book Council; instructions are here.

Children's Book Week is a promotional event, meant to encourage the buying of, yes, children's books. 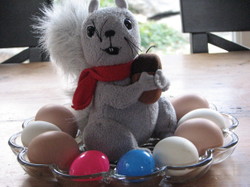 Happy Spring and Happy Easter from all of us at Chicken Spaghetti. With the obvious exceptions, the eggs come from our two backyard hens, and instead of the Easter Bunny, we have Earl the Squirrel, a real character.

May your days be filled with plenty of Peeps.

From my son's copy of Time for Kids, I learned about this list of teachers' favorite books for children. It comes from a 2007 survey by the National Education Association (NEA).

I don't see any surprises here, and I'd even hazard a guess that many of the teachers who filled out the survey came from the baby boom generation. I also wonder if the 10,000 educators had to vote on a pre-selected list. Anyway, what could we add to update this group a little bit? Here are my suggestions: Chrysanthemum, written and illustrated by Kevin Henkes, and Sam and the Tigers, written by Julius Lester and illustrated by Jerry Pinkney. Come to think of it, The Llama Who Had No Pajama, a poetry collection by Mary Ann Hoberman, would fit in here, too.

What are your ideas?

Edited to add: The entire results of the 2007 survey can be found at the NEA's web site, and the full list of 100 does include many more recent books. Chrysanthemum comes in at #59. Thank you to Monica Edinger, a teacher who blogs at Educating Alice, for the link to the whole survey.

I'd still like to hear readers' ideas of latter-day classics to complement the top five, above.