Sandra Boynton's beloved counting book Hippos Go Berserk! was first published some thirty years ago, and while some new hippo-starring books don't quite reach the Boynton level of inspired insanity, they're appealing in their own way. They do tread some of the same ground, but surely there's room on the shelf for more hippopotami.

Key Porter Kids, a Toronto-based outfit, has published a series of board books—One Hippo Hops, Hip Hippos, and Sad, Mad, Glad Hippos—with simple rhyming texts by Jane Yolen. The first one, a counting book, begins, "One hippo hops. Two hippos jump. Three hippos jog. Four hippos bump." Gosh, now I've given away almost half the plot; there's only one sentence per sturdy page—which is just right for babies and toddlers, of course. 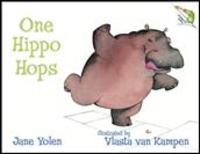 Illustrator Vlasta van Kampen's lovable animals are the best part of the series. She uses watercolor to give her hippos depth and dimension. It's a fat, happy bunch (except in Sad, Mad Glad Hippos, which concerns feelings), whether they're crowded onto a sled in One Hippo Hops or trying on green dresses Hip Hippos (about colors). Lounging near the beach and batting her eyelashes at two fishermen, a hippo mermaid (in Hip Hippos) is priceless.

The  series would make good birthday presents for very little people, and if you really want to get hippo-crazy, you could add to the box such classics as Veronica, George and Martha, and You Look Ridiculous Said the Rhinoceros to the Hippopotamus.

The new hippo books sound very cute. Thank you for not giving away the ending of One Hippo Hops!

I finally read You Look Ridiculous... and realized that it was a play on the "Little Monkey Face" drawing story. I really like it.

Alkelda, I'm not sure I've ever heard the Little Monkey Face story, but Junior said that the Waber book sounds like one of the tales in "Silly and Sillier." I like "You Look Ridiculous...," too; it's fun to read these older classics.

My 18 month old daughter loves Sandra Boynton's book so I will have to check these out too. They sound like they could be the new favorites.