It's not often that Mother Earth News gets mentioned on Poetry Friday, so I'm jumping at the chance to point to its interview with Wendell Berry, Kentucky's best-known farmer/poet/essayist/novelist.

You can read Berry's "How to Be a Poet" at the Poetry Foundation. I like these lines:

The Poetry Friday roundup takes place at Biblio File today. You'll find links to many other blog posts on poetry.

This is a bit late, but there's still plenty of time to catch the June Carnival of Children's Literature. It went up on Monday at Susan Taylor Brown's blog, and the theme is fathers in children's books.

Bringing the Boy Home, an Amazon adventure story, arrives in bookstores on July 1st. Full of suspense—and surprises—the novel features two boys on the cusp of manhood. One has lived his entire life with his tribe in the remote Amazon jungle; the other, adopted by an American woman, is returning to his place of birth for the first time in years.

Debut author N.A. (Nina) Nelson is practically a neighbor, living one town over from me, and earlier this month we sat down at a library cafe on the banks of the Saugatuck River, not a caiman or jaguar in sight, and talked about her book for ten- to thirteen-year-old readers.

How did you come up with the idea for this story?

Well, originally, I wanted to write a story about five kids who each had a special “sense” talent. For example, one kid would be able to see what happened in a photo fifteen seconds before and after the picture was taken, and another kid would be able to smell what happened in the photo fifteen seconds before and after, and another kid could hear, and another could taste, and another could touch what happened, and then they would join forces and solve mysteries. But when I told my critique group about this “novel” idea, one of the members said, “There’s already a book out where a boy can see photos move,” and I thought, “Hmmm, I don’t want to write a book that’s already been written,” so I tried to incorporate the five senses into a story that didn’t involve magic, which led me to thinking about the Amazon jungle people and how they use their senses every day to survive and the book just formed from there.

You have visited the Amazon jungle, but was it hard for you to write from the viewpoint of two thirteen year-old tribal boys?

I’m so glad you asked that, because I’ve been wanting to share this story forever: while I was writing Bringing the Boy Home, I watched a lot of videos about jungle tribes, and during one particular video, the camera followed this ten year-old boy and his pet tapir around and it reminded me exactly of a relationship between a boy and his dog: they went swimming together, wrestled around and were completely inseparable. It was the Amazon version of "Old Yeller." Later, the boy’s father was teasing him and said something like, “Oh, he’ll never find a girl—he’ll have to kiss frogs for the rest of his life.” And I thought, “Isn’t that funny that the Amazon jungle people say the same thing we do about kissing frogs?” From what I’ve read and seen—and from all the traveling I’ve done myself—I believe that no matter where you live, we all experience the same things: jealousy, heartbreak, love, anger, power struggles and yes, even kissing frogs.

Bringing the Boy Home is a work of fiction, but are there aspects of the novel that are based on real life?

I gave myself a lot of freedom by making the Takunami a fictional tribe; this allowed my imagination to run wild without worrying about someone later questioning the authenticity of my research. The jungle people are also very spiritual, so I was able to use that aspect to take the story in a couple cool, different directions. BUT even with the flexibility those two things afforded me, I wanted to incorporate as much tradition, language, flora and fauna of the Amazon as possible, so I really tried to educate myself on tribal life, ethnobotany and wilderness survival.

One of the biggest compliments I’ve received is when readers tell me that they were surprised to find out the Takunami aren’t a real tribe. That’s nice to hear.

What's the Amazon Conservation Team? Are you on it?

The Amazon Conservation Team (ACT) is this amazing non-for-profit organization who “works in partnership with indigenous people in conserving biodiversity, health, and culture in tropical America.”

During my research; I kept returning to one book, Tales of a Shaman’s Apprentice, by Mark J. Plotkin, for information and inspiration and when I decided that I wanted to somehow give back, I automatically googled Dr. Plotkin and found ACT (he co-founded it). The group has supporters such as Al Gore, Sting, Julian Lennon, Susan Sarandon and (laugh)—me.

Two of its better known programs are helping tribes map out their land, so unsavory logging companies can’t come in and say, “Oh, this little plot is yours and the rest of the rainforest is ours,” and providing support to shamans so that they can continue practicing their medicine and also pass their knowledge on to the younger generation.

I’m “teaming” up with ACT by donating a portion of the profits from Bringing the Boy Home to its Shamans and Apprentices Program.

I hear you're working on something new. What's the next book about?

It’s nothing like Bringing the Boy Home; it’s a humorous, contemporary YA, that takes place in Missouri, which is much closer to home since that’s where I was raised. I can’t divulge much else, because I’m a little superstitious when it comes to talking about my WIP, but I will say that I’m totally enjoying writing it: the characters crack me up everyday (in a good way) and I can’t wait to see how it ends.

Entertainment Weekly recently declared "1000 New Classics" in many pop-culture categories, including  "the best 100 reads from 1983 to 2008." A few children's books made the cut, including Harry Potter and the Goblet of Fire, His Dark Materials, The Giver, and Holes. Some of my favorite nonfiction (for grownups) is on there, too: Random Family, And the Band Played On, Friday Night Lights, and Borrowed Time. Whether you agree or disagree with EW's lists, they do make fun reading. And, I know, a few of you are going to run over there and tally up, right?

New "Edge of the Forest," and Blogging Thoughts

Up and ready for reading is a new edition of The Edge of the Forest, an online journal devoted to children's literature. Included in this month's issue is an interview with Gail Gauthier. In addition to talking about her books, the author, who started her blog back in 2002, told Kelly Herold,


According to JacketFlap, there are now over 700 children's literature-related blogs that are part of its network. There are probably more that haven't hooked up with JacketFlap. That's an enormous amount of content. Many of these blogs carry really good material. But there's way more material now that I'm interested in reading than I can read. My impression is that I'm not the only person in that boat. I think we've created far more blogs than the blog-reading public has time to consume.

I agree with Gail about the overwhelming number of children's book blogs, and after reading her comments, I began to wonder. What does that 700 number mean? Are some people turned off to the kid-book blogs because there are so many? Is it hard for a general non-kid-lit-affiliated person to know where to start reading? Are we bloggers reaching our target audience, and, if not, how do we do so?

Last week the 2008 Boston Globe Horn Book Awards were announced. Winners and honorees are as follows.

Nonfiction: The Wall, by Peter Sis.
Honor Books: Frogs, by Nic Bishop, and What to Do about Alice? by Barbara Kerley, illustrated by Edwin Fotheringham.

Picture Books: At Night, by Jonathan Bean
Honor Books: Fred Stays with Me! by Nancy Coffelt, illustrated by Tricia Tusa, and A Couple of Boys Have the Best Week Ever, by Marla Frazee

Special Citation, for excellence in graphic storytelling: The Arrival, by Shaun Tan.

Betsy Bird, NYC children's librarian (and purveyor of the blog A Fuse #8 Production), commented that the Globe Horn Book list "often rights the wrongs of other awards (and sometimes gives a hint of future winners)." Eligible books for this year's awards were published between June 2007 and May 2008.

The last day of school blew in cool and breezy this morning. Of late Junior has been somewhat wistful about the end of third grade. Last night he made some cards for a few teachers and brought out every single box of art supplies before deciding on his format: watercolor pencils and construction paper.

Junior's class spent the past month writing and illustrating their own picture books. The children worked really hard, revising many times in some cases. I was very impressed by all of the books; we parents heard a number of them read aloud by the authors in small groups recently. Junior's and several others' stories were about extra terrestrials.

Each book had a dedication page, and Junior's read: "To anybody who has crash-landed in a spacecraft."

That's my boy! Happy beginning of summer, everyone.

I'm not even going to wait until Poetry Friday to post a link to "Young American Indians Find Their Voice in Poetry" in the New York Times. Also worth checking out is the correlating reader commentary in answer to the question "What poem has made a difference in your life?" 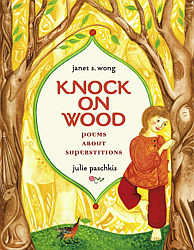 For today's Poetry Friday entry, I'd like to tell you about a book that Junior and I are enjoying: Janet S. Wong's Knock on Wood: Poems About Superstitions. I have soft spot for books, like this one, that start up a conversation between the people reading it. That's my hope for all children's books, really.

Junior's age, 8, is a fine one for talking about superstitions; he's heard of a few that Wong addresses in the seventeen short poems. With a whiff of mystery and magic, the subjects include four-leaf clovers, horseshoes, broken mirrors, and ladders. Because he didn't know about all of them, Junior was eager to read the glossary where the poet gives a little background on each superstition. For instance, in reference to black cats, Wong notes that they were "revered in ancient Egypt, but feared in medieval Europe." Since we're feline aficionados, we decided we'd rather be like the ancient Egyptians. The poem "Cat" begins "Look out for her, the black cat./Walk backward/when she crosses your path/if you fear the magic she brings/as she travels through your time." Julie Paschkis's typically lush and beautiful illustrations accompany the poems, and provide additional things to discuss.


Many thanks to Wild Rose Reader's Elaine, who gave away Knock on Wood in a blog contest a while back.

You'll find links to more poetry talk in the kidlitosphere at the blog called a wrung sponge. See "Thank Goodness It's (Poetry Friday)," an article at the Poetry Foundation which explains the whole endeavor.

PEN American Center is currently featuring Part I of an email conversation between two authors who write for children and young adults: Markus Zusak, an Australian, and Susan Campbell Bartoletti, an American. Both have recent books about the Second World War and the Holocaust: Zusak's novel The Book Thief and Bartoletti's Hitler Youth (nonfiction) and The Boy Who Dared (fiction). In his first correspondence with Bartoletti, Zusak confesses he hasn't read Hitler Youth. Not exactly an auspicious beginning, but the discussion improves from there. Click here to read it.