Home Archives Profile Subscribe
Chickens Taking the A Train? (Or Perhaps the 4, 5, or 6?)
Good-bye, Coleen Salley

On the Books, with Janet Halfmann 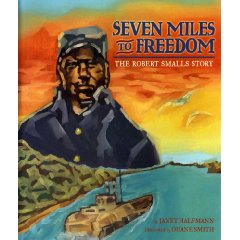 I'm happy to welcome Janet Halfmann to Chicken Spaghetti's "On the Books" series. She is the author of many books for children, including Little Skink's Tail  (illustrated by Laurie Allen Klein) and Seven Miles to Freedom: The Robert Smalls Story (illustrated by Duane Smith). The blog A Wrung Sponge called the award-winning Little Skink's Tail "a charming picture book that introduces the lives and habitats of real animals." Seven Miles to Freedom received a starred review from the book-trade journal Kirkus, which noted "[t]he daring Civil War escape of a slave, his crew and their families in a stolen Confederate supply boat receives appropriately inspirational treatment..."

Let's hear from Janet. What are you reading lately?

Every so often when I visit my local library in South Milwaukee, Wisconsin, I stop at the bookshelf holding new children’s releases and read just about every picture book there. Some of the recent gems I found are:

Hurry! Hurry! by Eve Bunting, illustrated by Jeff Mack, is a wonderfully simple book about the excitement of a new birth—and my 4-year-old grandson loves it!

Little Blue Truck by Alice Schertle, illustrated by Jill McElmurry, is a fun, rhyming story about a plucky little truck that always has time for others, even a self-important dump truck. And the little truck’s friends always have time for him. The book is full of animal and truck sounds that are fun for kids to repeat.

Fartiste by husband and wife Paul Brewer and Kathleen Krull, illustrated by Boris Kulikov, is another rhyming story, this time a mostly true story. It features Joseph Pujol, who learned early in life that he could control his farts. Later, with ten children to support, he perfected his farting and took his act to Paris’s famed Moulin Rouge. There, he played to sellout crowds—farting animal sounds, sneezes, and songs by Beethoven and Mozart—all without creating a stink. This story is a rip-roaring treat.
Also, the Fall Writers Retreat of the Wisconsin chapter of SCBWI [Society of Children's Book Writers & Illustrators] is coming up October 17-19 so I’m reading the new books of my fellow Wisconsin authors and illustrators. The stack is very high! Both the spring and fall 2008 lists of books by Wisconsin creators can be found here.
Happy Reading!
Editor's Note: Don Tate interviewed Duane Smith, the illustrator of Seven Miles to Freedom, at The Brown Bookshelf blog.

Previously in "On the Books":

Posted at 03:21 PM in "On the Books", Intermediate Readers, Picture Books | Permalink | Comments (2)

I'm going to add Seven Miles to Freedom to my library wish list right now. And while I'm at it, Fartiste (for my sons, of course...).

Thanks, Chris, for adding Seven Miles to Freedom to your wish list and I know your "boys" will enjoy Fartiste!