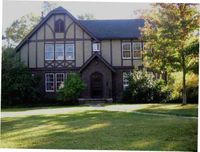 Once, while leading a tour of Eudora Welty's house in Jackson, Miss., docents and their group had to wait out a tornado warning in the historic home's cellar. One woman, evidently unfamiliar with the fact that one should never fuss with Mother Nature, was reluctant to troop down the stairs, but finally persuaded by her hosts' gracious insistence, she relented. The first thing she did upon entry was to fish out her cell phone and dial up a friend, saying, "I'm in Eudora Welty's basement."

That was one of several delightful anecdotes I heard on a morning tour of Eudora Welty's house in Jackson's Belhaven neighborhood. The house has been restored to look the way it did in the 1980s, when Welty, who died in 2001, was still working—as if "she just stepped out to go to the grocery store." Brewer's Dictionary of Phrase & Fable sits next to her reading chair in the living room, books sprawl over part of the sofa, and a framed fan letter from E.M. Forster hangs in the sitting room. Her literary prizes will eventually be displayed in the visitors' center next door; she did not  put them up on the walls of her home. After she died and the house was being prepared for restoration, her Pulitzer Prize (for The Optimist's Daughter) was found in a cardboard box in a closet. Built by her parents, 1119 Pinehurst Street was Eudora Welty's home for 76 years. She was sixteen when the family moved in. Her high-school graduation tea was held in the Camellia Room, or the side yard, while the house was being finished. (That's the side porch, on the left, which is near the camellia bushes, one of which can be seen on the right.) Although she travelled widely, Welty lived here permanently from the time her father took ill in the Depression and she came home from New York, where she had been studying business at Columbia. (She already earned an undergraduate degree from Wisconsin.)

Along with the many books in the living room is an upright Steinway piano (pronounced "pee-anna," if you're from Jackson), which came from the family's first home, on Congress Street. (I couldn't take a picture of the piano; no photography is allowed inside the house.) It seems that Mrs. Welty felt that young Eudora ought to take music lessons, but both the lessons and the instrument were expensive. So, Mrs. Welty bought a cow, and sold milk in the neighborhood, which Eudora delivered. That raised enough money for Eudora's musical education. 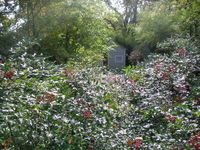 At the back of the property is the boys' clubhouse, which belonged to Welty's two brothers. Welty used to go back there to chew gum, which her mother didn't care for. You can kind of see the club house in the picture on the left, which is taken from the rose garden. 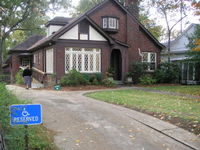 On the right is a photograph of the new visitors' center, formerly just the house next door. The Eudora Welty Foundation's offices are in this building. Before the neighbors' house was acquired, visitors had to sit in the author's garage to watch a DVD about her life and work. There are still a couple of bottles of bug spray on a shelf in the movie room, perhaps left over from those days. Incidentally, the whereabouts of Welty's last car are known, and some would like to see the auto back in its rightful place, now that there's space again in the garage.

On the sleeping porch, I did spot the set of Our Wonder World, the children's books that Welty refers to in her memoir, One Writer's Beginnings. (I mentioned those books last spring.) You can see the sleeping porch's four windows in the view of the house from the back, below left; the room is on the second floor, on the left-hand side. Like other houses built in the 1920s, the Weltys' home had no central air-conditioning. In fact, only one room in the house, the sitting room, even had a window unit later on; Welty's nieces called it "the cool room." 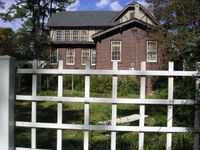 I counted several works by V.S. Pritchett in the Pinehurst collection. Welty and the English author and literary critic became friends after she had reviewed his work. Writing about Pritchett's Selected Stories for the New York Times Book Review, Welty said, "Each story's truth is distilled by Pritchett through a pure concentration of human character. It is the essence of his art. And, of course, in plain fact, and just as in a story, it is inherent in the human being to create his own situation, his own plot. The paradoxes, the stratagems, the escapes, the entanglements, the humors and dreams are all projections of the individual human being, all by himself alone." If you're ever in Jackson, my hometown, I recommend paying a call on the Eudora Welty House to see where short-story master and novelist created her own situation and her own plot. The basement isn't usually part of the guided tour, but if you come in the spring (tornado season), you never know.

How wonderful! Thank you for the post and the photos. I cannot believe she kept her Pulitzer in the closet. That made me laugh right out loud. Brilliant.

Isn't that awesome! This is a can't-miss site in Jackson.

Oh, how lucky you are to have visited Eudora Welty's home! I love seeing how authors lived. Once when I was in Savannah, serendipity had it so that I was staying next door to Flannery O'Connor's old house. I callled the museum curator and got a private tour. It was heavenly.

Lisa, that must have been great! Wouldn't you like to see O'Connor's farm, too, where she later lived with her mother?

Thanks so much for this post, Susan! I love to visit author's homes. :)

Jama, you're welcome! The next place I should go, and I'm really remiss for not having been yet, is the Mark Twain house in Hartford. I know it's having financial troubles.

Eudora W.'s is one of my favorites so far. Her nieces either run the foundation or are very involved in it, and the attention to detail in the house really shows.

Thanks for the written tour of Eudora Welty's house. Sounds like a must see destination in Mississippi.

NT, perhaps you'll go with us next time!

What a wonderful excursion. I loved her book One Writer's Beginnings. The photos are fabulous.

I would love to visit Eudora Welty's house! Thanks for the great post, Susan.

I'm glad you got to visit. I wish I could have been there with you.

Jone, I enjoyed One Writer's Beginnings, too. So much of what I saw at the house seemed familiar because of that book.

Sara, my mother and I really enjoyed our tour, and the docents were lovely--and knew a lot!

Wisteria, I am so game to go back. I will give you a holler when I'm in Jackson for more than just a couple of days. It's like our docent said: every time she leads a tour she notices something new.

Her house doesn't look like I pictured it! I don't know why, but I didn't envision brick. I'd love to visit sometime.

That's a hoot about buying a cow to pay for piano lessons!

This year I read both 'The Optimist's Daughter' and 'One Writer's Beginnings' (in that order), and they made me a fan for life.