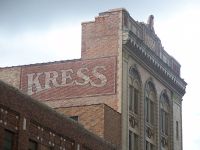 I am happy to welcome guest columnist Sarah T., who grew up in central Texas.

A long time ago, in the 1930s, three brothers and their young sister enjoyed an exciting exchange of gifts around the Christmas tree.

Each gave the others a Big Little Book purchased at Kress's or Woolworth's by a shopper with a dollar to spend for six gifts for the family. A total of 12 books were selected by the brothers and sister, shopping at different times.

The fun thing about the gift exchange was that there were no duplicates of titles. This happened at least two Christmases, delighting the family and friends!

As one brother relates it, "The Big Little Books were a boon to our early childhood Christmas shopping." They were 5 cents each. The books were favorite reading among the children, so having 12 new titles was the greatest.

The Big Little Book was three inches by four inches and about an inch and a half thick. The paper was very coarse like the manila paper which was used at school in those days.

The BLBs were published by the Whitman Publishing Company of Racine, Wisconsin. The first books were just like comic strips, but longer; later BLBs were adaptations of movies. They had titles (and subjects) like "Buck Jones in the Fighting Code" and "Dick Tracy and the Boris Anson Gang." One brother remembers books featuring Joe Palooka, G Men on the Job, Tailspin Tommy, Orphan Annie, and Tarzan.

Other members of the family probably received boxes of chocolate-covered cherries. A one-pound box sold for 19 cents at the dime store.

That's a great story! Hmmmm....Sarah from central Texas...maybe she should have her own blog!!

Thank you for introducing Sarah T. to us all. What great memories to share at this holiday season.

I hope Sarah T. will continue to contribute to your blog from time to time!

I love this. Thanks for sharing some space with Sarah T.

Cari, I'm so glad you liked it. Sarah T. will be happy to hear that!

As Sarah T.'s niece (daughter of one of those brothers) and a big fan, I can promise you she has more great stories to share! I look forward to reading them and passing them on to my own children.

Hey, Sally. I hope Sarah T. will contribute another piece! I loved this one.