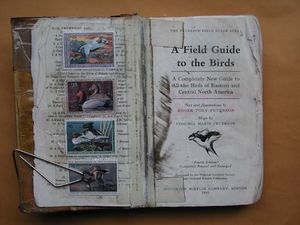 When I read Hank Golet's story on the Connecticut Ornithological Association's email list, I knew it was the perfect intro to a blog post about field guides and other nature-related gifts. Hank kindly gave me permission to reprint the tale here. (Note: Roger Tory Peterson [1908-1966] invented the modern field guide; he lived in Connecticut for many years.)

Reading [another birder's] lost Peterson Field Guide story reminded me of one of my own experiences.

I was birding at Menunketesuck flats in Westbrook, probably 20 years ago, and left my signed Peterson Guide on the seawall. I didn't know it was missing until I reached for it two days later, and found it wasn't in the wooden box behind the seat in my pickup. Somehow I remembered putting it on the wall and drove down to Westbrook never expecting it to still be there. The guide was where I left it...but I didn't mention that it rained all of the day before. I took the book home and put paper towels between every page to dry it out the best I could but it still had/has that "expanded" look.

Peterson always signed his works with a red soft pen that was not waterproof.  His signature had faded badly in my guide but it was still readable. Roger and his wife Virginia used to like to come down to the dock at the end of the road where I live here in Old Lyme. One early evening I was there when they came down. I showed him the guide and told him the story of my leaving it on the seawall and asked him if he would sign it again. He did but he didn't have his red pen so he signed it with my black ballpoint.

So, I may have the only Peterson field guide signed twice, once in red and, right underneath, in black.

Besides that, I probably have the only Peterson Guide (the same one) that has a black tire mark across the third page in, from when the bag that I was carrying it in came off the back of my motorcycle on I-95 and the car behind me ran over it.

Following are some resources for finding an equally stalwart gift for naturalists young and old.

Luke Tiller's Under Clear Skies, a top-notch birding blog, recently posted about holiday gifts for birders; some of the DVDs mentioned would be great for children. Plus, Luke has a few other ideas for kids, too.

At Scientist, Interrupted, GrrlScientist points out some cool new natural-history books—many of them kid-friendly—including a pop-up affair with sound called Birdscapes and a graphic novel about Darwin. She also reviews a nonfiction title for adults, Dry Storeroom #1: The Secret Life of the Natural History Museum, "a charming and affectionate tour through the the inner workings and politics of London's Natural History Museum by paleontologist and trilobite expert Richard Fortey." And for children, Grrl Scientist gives high marks to Sparrows, a picture book.

The 10,000 birds blog maintains a wonderful archive of reviews of books and equipment. The Birder's Library has a lovely list of books for children, and 100 Scope Notes' consideration of Animals: A Visual Encyclopedia makes that one sound like a good holiday present for young nature-lovers.

Finally, don't miss the American Association for the Advancement of Science (AAAS) top science books for children and teens (finalists for the AAAS/Suburu SB&F Prize for Excellence in Science Books).

Happy reading! Many thanks to Hank Golet for his contribution.

My students LOVE to check out the field guides, they are VERY worn, but the kids love them. I had a gifted teacher this year do a whole unit using the field guides.
great gift suggestion for the kids that loves animals or science!

Kathy, that's neat about the guide books. I'm glad to hear the kids are interested. And what a cool unit the teacher came up with. I love guide books and maps.

Are all the animal books HUGE in your library? They are at Jr.'s school. As a library volunteer, I am often re-shelving them.

Thank you so much for posting this! My 6-year-old is going to love the suggestions :)

You're welcome, Suji. Sounds like y'all love nature books, too! This morning Jr. was asking me what a wolverine looks like, and I realized we needed a trip to the library!

You're welcome, Meredith. The pop-up book Birdscapes, which Grrl Scientist mentions, is on several Best the Year lists.