Dr. Seuss, according to Paul Chowder 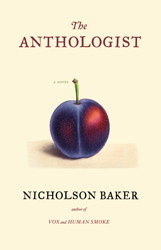 Paul Chowder, a poet and the hero of Nicholson Baker's new novel, The Anthologist, is having a heck of a time writing the introduction to an anthology of poems which he put together. In fact, he's not writing it. He's talking. About iambic pentameter, love, badminton, dogs, and more. "God, I wish I was a canoe," he says at one point.

I was tickled by a mention of  children's literature, which comes early in the story. Paul recalls some of his early influences, like Edward Lear, Ludwig Bemelmans, A.A. Milne, "[a]nd Dr. Seuss, of course, the great Ted Geisel. Who probably was, if I really want to be truthful and honest—and I do, of course—the poet most important to me until I was about twelve."

I highly recommend this funny, moving book, which is a must-read for poetry fans especially.

For a considerably more in-depth review, see Janet Maslin's take on The Anthologist, in the New York Times.