Episodes: My Life As I See It, by Blaze Ginsberg 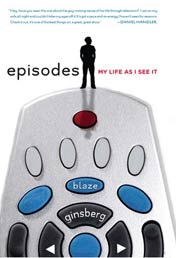 In 2002 I read Debra Ginsberg's Raising Blaze, a single mom's memoir about her son, who was eventually diagnosed with high-functioning autism. In kindergarten Blaze, while knowledgeable about the music of Miles Davis, couldn't sit still at circle time, and by fourth grade D. Ginsberg served as his in-class aide. Meanwhile, the two were surrounded by a very loving family—the author's parents, three sisters, and brother. As Blaze might say it, I became a fan of Blaze during that book.

Episodes is Blaze's memoir; he's only in his early twenties. He has organized his high-school and early college years as if they were episodes of a long-running TV program listed at the Internet Movie Database, including a cast, guest stars, summary, and soundtrack. Thanksgiving with the large family is presented as a holiday special. B. Ginsberg has come upon a very clever, appealing way to present material both typical of teenage years (wanting a girlfriend, going to the movies) and not-so-typical (an obsessive interest in garbage trucks and buses, a deep dislike of balloons).

I have no idea whether other people with high-functioning autism see the world this way; the viewpoint is the young author's own, and I found the book, published for the young adult market, consistently funny and heart-rending. The writing itself is straightforward: "Summary[:] Courtney was at my house yesterday. Today she tells me she wants to do it again, and this time we include Amber in the plan because I discover that Amber is all bitter about not being included." The cumulative effect of this long-running show is what's important because ultimately Blaze is telling a universal story: we all want friends and love. We all want to be successful at whatever it is we choose to do.

Episodes will be my nomination for the Cybils award in the Middle Grade/Young Adult Nonfiction category—unless someone beats me to it.

For more nonfiction books for children and young adults, see the collection of Nonfiction Monday links at the blog Moms Inspire Learning.

Ginsberg, Blaze. Episodes: My Life as I See It. Roaring Brook Press, 2009.

I borrowed Raising Blaze from the library some years ago (and returned it!), and Episodes is from my home library.

I babysat an autistic kid who is now in his twenties, and I often wonder what he thinks of the world now that he's able to articulate it a bit more (not enough to write a book, however!). This sounds like a gem of a YA book to begin with, but as a gift to a parent with a child who fears they'll never get past the "he won't sit still during Circle Time," it's priceless.

Tanita, his road is not easy (whose is?), but the author is unapologetically himself. I really liked that aspect of the book.

I think you'd like Episodes, and would probably find the structure especially interesting. Let me know if you read it!

Thanks for highlighting this wonderful book. I want my children to have a voice and to be themselves and this is inspiring for me as a parent and former teacher. Thank you!!

Elaine, I enjoyed the voice in this book so much--and the humor. And yes, I agree: we want our kids to have voices and to be themselves. I'm finding that I want to go back and re-read Debra Ginsberg's book, too; it's been a while since I first came across it.