The page here called "Best Children's Books of 2009: The Big List of Lists" keeps growing. I'm waiting on School Library Journal's lineup*, which ought to be announced shortly; meanwhile, I've added a bunch of links recently, including the following:

The Independent: The 50 Best Winter Reads (UK). Mostly adult titles, but some books for children.

Also: be sure to look at Largehearted Boy's "2009 Year-End Online Music Lists" and "Online 'Best of 2009' Book Lists," as well as MotherReader's updated "105 Ways to Give a Book," in which MR pairs books with toys or other gifts.

The Middle Grade/Young Adult Nonfiction category of the Cybils awards is so hot that it's smokin'. 2009 has been a very good year for children's nonfiction. Two of the five finalists for the National Book Award in Young People's Literature were nonfiction titles: Claudette Colvin: Twice Toward Justice and Charles and Emma. As you've heard, Claudette Colvin won. Those books and other strong candidates are vying for a Cybils award. Who will make the Cybils' final-five short list? I don't know!

Here are some links to reviews written by the Cybils' Middle Grade/Young Adult Nonfiction panelist-bloggers and others. If you know of other reviews in this category, tell me in the comments section, and I'll add to the list because look at all this awesome talk about nonfiction books for kids!

Nelson Mandela: Long Walk To Freedom. Jennie Rothschild at Biblio File says, "There's not a great sense [in this book] of why Mandela is the hero he is..."

Claudette Colvin: Twice Toward Justice. Alicia Blowers at The LibrariYAn writes, "The compelling narrative (including Claudette's own words), extensive notes and suggestions for further reading make this a book perfect for the inquisitive middle or high schooler or for class research."

The Great and Only Barnum. Middle-grade fiction judge David Elzey at The Excelsior File says, "...a breezy read, well-documented with a strong narrative thread, and actually fun. Makes me wish there were more biographies like this when I was a kid."...¶ Plus, there's a review written by a fourth grader at Educating Alice. That student writes, "... [A] very amazing book by Candace Fleming."

Three Cups of Tea (Young Readers Edition). Erin Walker at Erin Explores YA says, "...the writing itself is not particularly engaging, though fortunately the clunky text does not diminish Mortenson’s story or his message."

Marching for Freedom. At Emily Reads, Emily Mitchell, who writes all her reviews haiku-style, says,"I can't find anything / negative to say about / this book. Can you?" Emily is a judge in the nonfiction picture book category.

Episodes. As the category organizer for older-reader nonfiction, I couldn't resist jumping in with some commentary about this memoir: "[Blaze Ginsberg] has organized his high-school and early college years as if they were episodes of a long-running TV program listed at the Internet Movie Database, including a cast, guest stars, summary, and soundtrack."

Charles and Emma. Middle-grade fiction panelist Abby Johnson, a.k.a. Abby (the) Librarian, says, "Got kids coming in looking for narrative nonfiction? Hand them this book pronto. I'd also hand it to fans of Pride and Prejudice or other such classic lit. It's readable enough to be recreational, but it's factual and will work for research reports, too."

For Liberty: The Story of the Boston Massacre. Middle grade/young adult nonfiction judge Colleen Mondor writes at Chasing Ray, "Every time I read Timothy Decker I am reminded of how casually many authors approach historic subjects for children. Decker however respects his audience as much as his subject and thus is one of the best in this genre."

Cars on Mars. Former Cybils judge and category organizer Elizabeth Bird at A Fuse #8 Production says, "Picture this: robots with extraordinary life spans exploring a planet 303,000,000 miles away. It's not science fiction, it's fact."

After Gandhi: One Hundred Years of Nonviolent Resistance. Blogging at A Wrung Sponge, fiction picture book judge Andromeda Jazmon says, "I found reading this book to be delightful, encouraging and inspiring," though she notes "that the... graphics are not particularly appealing to youth accustomed to full color, lively graphics."

Almost Astronauts. Angela at Bookish Blather, who attended the recent Cybils discussion in NYC (okay, I'm stretching the connection here, but I like her review), writes, "[Tanya Lee] Stone has packed a lot of history into a compact book, giving great descriptions of not only the physical astronaut trials the Mercury 13 women went through, but also the social and political trials they faced in daring to want to pilot a space shuttle."

Years of Dust. At the Washington Post, Abby McGanney Nolan, who has nothing to do with the Cybils at all, writes, "...Albert Marrin's sweeping study of the dirty '30s may give readers the uncomfortable sensation of dust in their throats. Fortunately, the book also contains clear explanations of what led to the complicated tragedy known as the Dust Bowl."

Want to learn about more nonfiction for children? Check the Nonfiction Monday roundup at the blog Practically Paradise later today.

Phillip Hoose's book Claudette Colvin: Twice Toward Justice won the National Book Award for Young People's Literature. Colvin, a previously unsung civil rights-era heroine, accompanied Hoose to the ceremony. Upon accepting the award, Hoose said, "I thank this woman beside me whose story was about to disappear. We got to tell an untold story." (Thanks to School Library Journal's Rocco Staino [@RoccoA] for his Twitter reporting.)

The citation at the National Book Foundation's web site reads, in part, "How could we not know of this courageous teenager and her remarkable contribution to the U.S. civil rights movement? Phillip Hoose’s riveting and intelligent portrait incorporates photographs and other galvanizing primary source illustrations, as well as Claudette Colvin’s own voice, to draw the reader fully into 1950s Montgomery, Alabama."

Claudette Colvin is also a nominee in the Children's and Young Adult Bloggers' Literary Awards (the Cybils) for Middle Grade/Young Adult Nonfiction.

Children's Literature Cafe at the NYPL

On November 7th I took part in a panel discussion at the New York Public Library. What an honor to have been asked! Led by Elizabeth Bird, NYPL librarian and moderator extraordinaire, our group of bloggers—Pam Coughlan (MotherReader), Anne Boles Levy (Cybils), Elizabeth Burns (A Chair, A Fireplace & A Tea Cozy), and I—talked about the Cybils awards, children's book blogs in general, and recent book controversies. There was a lot to cover in an hour.

I mentioned how much I appreciated the reviews of the books nominated in the various Cybils categories. The blogs Carol's Corner and Literate Lives are writing up many nonfiction picture books; I'm making note of titles to share with my first-grade reading buddies. Nugget on the Flight Deck, a fun book about aircraft-carrier lingo, is one I first learned about from the critique at Not Just for Kids. As a result of our talk, reviews are now linked to the nominated titles at the Cybils blog.

You'll find other writeups at Bookish Blather, who was in the audience, as well as at Tea Cozy, MotherReader, the Cybils blog, and Elizabeth Bird's A Fuse #8 Production. 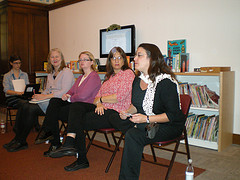 The scene: Two boys, both around 10, watching a kitten play.

In tomorrow's New York Times Book Review, look for the Best Illustrated Children's Books of 2009. If you can't wait until then, check them out online now!

News from the UK: the Kate Greenaway Medal and Carnegie Medal long lists. The Greenaway is the equivalent of the US's Caldecott and the Carnegie the same of the Newbery.

A new lineup of the year's best science books for children was announced by the American Association for the Advancement of Science.

The Bulletin of the Center for Children's Books collected a large number of titles for its 2009 holiday gift guide.

All of these and more have been added to Chicken Spaghetti's "Best Children's Books 2009: The Big List of Lists," which is growing every day.

More present-spotting at Wired magazine's GeekDad blog, where John Baichtal presents "Holiday Gift Guide #1: Books." On his list is The Geek Atlas: 128 Places Where Science and Technology Come Alive. (I've gotta get it.) You'll find some children's books here, too. 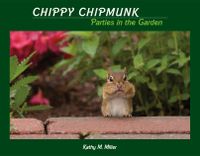 Does your  kid like chipmunks? Like seeing them doing adorable things like stuffing their little cheeks and washing their faces? Then he or she will get a real kick out of the picture book Chippy Chipmunk Parties in the Garden. Kathy M. Miller, the book's author and a professional photographer, spent two years taking pictures of a chipmunk who visited her yard. Her dedication paid off in some Cute Overload-worthy photographs.

Chippy talks and thinks like a human, though Miller does weave a bit of factual material, too. "[The chipmunk] surprised a flicker who was feeding on ants. 'Ants! Yuck!' squealed Chippy. 'Grubs are my favorite bugs.'

An editor might have tightened the text and made some other changes to this self-published book, but the photos are what count. Chippy sniffs flowers, drinks from a birdbath, and munches on a peanut. Awww.

Recommended for four to eight year olds, especially the animal-loving crowd and fans of such tales as Earl the Squirrel.

I bought my copy of Chippy Chipmunk Parties in the Garden at the Fat Robin Wild Bird and Nature Shop , in Hamden, Connecticut. The store carries an assortment of nature guides and other books in addition to binoculars, spotting scopes, and bird-feeding supplies.

It's Cybils Time in NYC. Join us!

Who: Children's book bloggers Pam Coughlan (MotherReader), Anne Boles Levy (one of the Cybils founders), Elizabeth Burns (A Chair, A Fireplace & A Tea Cozy), and me. Moderated by Elizabeth Bird (A Fuse #8 Production), of the New York Public Library.

When: Saturday, November 7th, at 2

Our discussion promises to include "the state of children's literature online today, including ethics, publisher/blogger relations, transparency, influence (or lack thereof) over published titles, and what it means to represent an online community of children’s literary enthusiasts."

The New York Public Library notes, "The Children’s Literary Café is a monthly gathering of adults who are fans of children’s literature. Professionals, librarians, authors, illustrators, publishers, booksellers, teachers, and anyone else interested in the field are welcome to attend our meetings. The Literary Café provides free Advanced Readers galleys, a rotating series of talks with professionals in the field, and great conversation. This program is for adults only."