A note from Susan: The biggest reader I know is my husband, Norman, and I recently asked him about his favorite books of the year. Clearly knowing the way to my heart, he wrote the following fantastic list. A change of pace from the usual kid-lit fare here, these are works for grown-ups, not children.

As last year came to an end and I found myself preoccupied with what was going to happen to the Kardashians, whether I could work for Diddy, and which team would win the next “Real World/Road Rules Challenge,” I decided it was time for a bold change—less TV and more reading. I’ve had a great year reading novels, most of which were published (or reviewed) in 2009 and all of which I checked out from my local library.

Many books I liked took me abroad. The Vagrants, by Yiyun Li, was a story of people in a small town in China in the late 1970’s. Two of my favorites spanned generations: The Book of Fathers, by Miklos Vamos, which is largely set in Hungary and focuses on the first-born sons in the Csillag family, and A Long, Long Time Ago and Essentially True, by Brigid Pasulka, which alternated between old Poland and modern-day Poland. The Skating Rink, by Roberto Bolaño, is a slim novel set outside of Barcelona. It’s a well-told mystery filled with political corruption and passion.

I became hooked on Orhan Pamuk’s work years ago when I challenged myself (in between reality TV shows) to read Snow, and this year when I read The Museum of Innocence, a love story set in Istanbul in the 1970s, I was not disappointed.

Fine writing is what I remember most about Love and Summer, by William Trevor, and Anna In-Between, by Elizabeth Nunez; the former set in Ireland and the later set in the Caribbean. Jeff in Venice, Death in Varanasi, by Geoff Dyer, is two separate stories, one taking place in Italy and the other in India.

While I am not usually drawn to short stories, Say You’re One of Them, by Uwem Akpan (stories set in Africa) and In Other Rooms, Other Wonders, by Daniyal Mueenuddin (Pakistan-based stories) were outstanding.

A few other well-liked books set outside the U.S. were The Housekeeper and the Professor, by Yoko Ogawa; Little Bee, by Chris Cleave; and The Little Stranger, by Sarah Waters.

My favorite novels set in the United States were, by far, Let the Great World Spin, by Colum McCann; Lowboy, by John Wray; and Dark Places, by Gillian Flynn. Also worth reading were Blame, by Michelle Huneven; Await Your Reply, by Dan Chaon; In the Heart of the Canyon, by Elisabeth Hyde; That Old Cape Magic, by Richard Russo, and One D.O.A., One on the Way, by Mary Robison.

Let the Great World Spin and Lowboy are outstanding works set in NYC, and other good city reads are The Believers, by Zoe Heller; Risk, by Colin Harrison; and A Happy Marriage, by Rafael Yglesias. Warning: when reading Yglesias’s book, keep plenty of tissues handy. Also worthy were How to Sell, by Clancy Martin; Admission, by Jean Hanff Korelitz; and Sag Harbor, by Colson Whitehead. I am going to add a final two novels that take place in both the US and another country; I highly recommend Crossers, by Philip Caputo (Arizona and Mexico),  and Brooklyn, by Colm Toibin (New York and Ireland).

While I’ve used several publications for finding good reading (e.g., The New York Times, The New Yorker, and People) and NPR, I especially want to thank the staff of the Westport Library and friends Maggie and Martha for sharing their recommendations with me.

Merry Christmas, everyone! And happy 2010, too.

I hope your holidays are filled with books and reading. One present in Junior's stocking tomorrow morning is going to be Brian Floca's Moonshot: The Flight of Apollo 11. If Santa gets her his act together and stops eating Zapp's barbecue potato chips and catching up on hometown news with his mom, Junior may also find Theodore Gray's book The Elements: A Visual Exploration of Every Known Atom in the Universe under the tree. It's for grown-ups, but I think there's enough there for children interested in science. With a little help, Junior picked out Julia Child's My Life in France for his grandma.

Here, via the Guardian and my new pals at EA300 Children's literature: a tutor's blog, is a slide show from Walker Books of new illustrations of some children's classics.

After reading about Austin Kleon's "newspaper blackout" poetry, due out in a Harper Perennial book next spring, I was inspired to create this poem by using a New Yorker Talk of the Town article (Lila Byock's "Speak, Bellevue," from the 12.07.09 issue). Of course, that's cheating a little bit since the magazine's language is so literary anyway; newspapers would provide much more of a challenge. Still, I enjoyed finding the right words—as well as the surprise of what popped up. The height and width of the column of print reminded me of tall buildings, like apartment houses, in the city. I imagined the one here could be the home of a frustrated writer. The blue sky at the top comes from the construction paper that I used as a background for the scan.

The poem is an aside from my usual talk of children's books, but you'll likely find more poetry for kids in the roundup tomorrow. I'll add a link for the host blog then. Update: author Susan Taylor Brown is collecting links for all the Poetry Friday posts at her blog.

Link (and an explanation of Poetry Friday)

"Thank Goodness It's (Poetry) Friday," at the Poetry Foundation

Sometimes I do other things besides blog. No, really. For instance, I have this new pair of binoculars, and I use them to check out the bird life in the neighborhood and nearby—in addition to the two hens in the front-yard chicken coop, of course. Recently the new binocs and I were captured not on film but in a sketch. Go see. 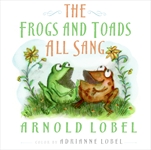 Frogs and toads and Arnold Lobel and me. A Poetry Friday post at PBS Parents' Booklights in which I talk about The Frogs and Toads All Sang. Head over and say howdy, or ribbit, okay?

Save That Wrapping Paper! 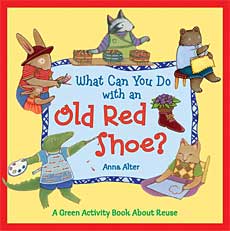 Hanukkah starts tomorrow night, and Christmas is just two weeks away. What to do with the leftover gift wrap? Save it to make next year's holiday cards. In What Can You Do with an Old Red Shoe?, Anna Alter gives clear, concise instructions for that activity and a number of other reduce-reuse-recycle projects. Written for parents and young children working together, the picture book, which is populated by friendly-looking (and busy) animal characters, should inspire some new ways of looking at everyday objects. Aha! That empty tomato-sauce can is going to be a beautiful lantern by tonight.

What Can You Do with an Old Red Shoe? is a nominee for a Cybil award in the Nonfiction/Informational Picture Book Category.

Me: I'm so excited. I love dolphins!

And so began a Tuesday morning with two of my first-grade reading buddies at a city school. They read. I listen. Occasionally we veer off topic.

Today's selection, for which we'd made a special trip downstairs to the school library, was Dolphins, by Leighton Taylor. The girls wanted a book about dolphins. I am often surprised, although at this point I shouldn't be, at how well first-graders read a book they're interested in, one that might be above their level.

Jazzie and Ana told me that they have to keep library books in their desks. The books must stay at school. I don't think the practice is uncommon.

Jazzie read Dolphins aloud. She needed a word or two pointed out, something a parent could do easily. Jazzie was acing it, sounding out words and reading captions.

Dolphins is part of Lerner's Early Bird Nature Books series. The publisher says that the reading level is third grade. Jazzie is in first.

Ninjas should be able to take books home from the school library.