28 Days Later, a monthlong celebration of African American writers and illustrators, at The Brown Bookshelf

2010 Newbery winner Rebecca (When You Reach Me) Stead, interviewed by Kurt Andersen, at WNYC Radio's Studio 360

Author Katherine Paterson on Apple's iPad, at the New York Daily News. "It is as futile for us to fight technological advances as it was for Plato to battle literacy."

A new Carnival of Children's Literature, with links to many blog posts, at Jenny's Wonderland of Books

Speaking of Brian Floca, I highly recommend Moonshot, a gem of a picture book about the Apollo 11 moon landing. Floca's college newspaper, The Brown Daily Herald, recently talked to the author-illustrator-award winner.

A bounty of recommendations for nonfiction books for children, at Wild About Nature, host of this week's Nonfiction Monday fiesta.

"Calvin and Hobbes" cartoonist Bill Watterson was interviewed by the Cleveland Plain-Dealer. The Millions blog says that it's thought to be Watterson's first interview since 1989.

From the Plain-Dealer article, this great news, too: in July, the U.S. Postal Service will issue stamps honoring Calvin and Hobbes, Garfield, Archie, Beetle Bailey, and Dennis the Menace. 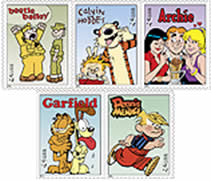 Thanks for linking to my Booklights post, Susan. And thanks for the other "coffee break" news, too. It's a nice format!

The stamps! THE STAMPS! I am going to buy a lot of those.

Thanks for linking to the Watterson interview. I enjoyed it, and I'm going to have to share it with Lucas, too. He just told me the other day that he can't decide if his favorite author is Bill Watterson or Jerry Spinelli. He did say Spinelli has a slight edge at the moment since he's still writing.

Jen, you're welcome. Some weeks just call for a news roundup!

Adrienne, I know, I know! I thought of you when posting about these stamps. We are already planning to buy lots.