The 2010 winners, all picture books, are as follows:

Bring Me Some Apples and I'll Make You a Pie: A Story About Edna Lewis, by Robbin Gourley (Houghton Mifflin)

Our Shadow Garden, by Cherie Foster Colburn, with art by the children of the Children's Cancer Hospital of M.D. Andersen Cancer Center  (Bright Sky Press)

The American Horticultural Society explains the prizes on its website, "Created by the American Horticultural Society and the Junior Master Gardener program, the “Growing Good Kids—Excellence in Children’s Literature” award program honors outstanding children’s gardening and nature books. Each year, this award will recognize a select group of children’s books that are especially effective at promoting an understanding of, and appreciation for, gardening and the environment."

Don't miss the "Growing Good Kids" classics, too. You'll find Miss Rumphius, The Ugly Vegetables, Too Many Pumpkins, and many more excellent books to share with children.

Don't miss the lovely essay "Evolution of a Reader," at The Millions. Written by Andi Diehn, the piece begins,

I envy the way my oldest son reads, stretched out on the living room couch, all of a sudden this year taking up most of three cushions.  Watch his face: his lips move, his eyebrows raise and lower in drastic measures, he smiles, winces, gapes and falls still all in a mere breath.

He practices the cliché – he devours books.  But, even better, the books devour him.

I used to be the same way.  When I was about ten a pen pal came to visit from all the way across the country and I didn’t notice her for a few days after discovering a copy of Madeleine L’Engle’s Meet the Austins in her suitcase.

Pulling Books from the Tar Pits

Yep, LA's La Brea Tar Pits. I pull book ideas from everywhere. Y'all have probably noticed that. I thought that the gift shop at the Page Museum, which is right there at the pits, offered an enticing array of woolly-mammoth-era reading for kids. Did I buy the books? No, I did not. I took pictures of them. (That was only one of many "stop-it-you're-embarrassing-me-Mom" moments for our 10 year old; I may also have called him "Honey" instead of his name that very same day. In public.)

We highly recommend a trip to the Page and the pits. Until then, read up:

Sunset of the Sabertooth, by Mary Pope Osborne (Random House, 1996)

Sabertooths and the Ice Age: A Nonfiction Companion to Sunset of the Sabertooth, by Mary Pope Osborne (Random House, 2005)

Revenge of the Itty-Bitty Brothers, by Oliver Lin (Simon & Schuster, 2009)

Mammoths and Mastodons: Titans of the Ice Age, by Cheryl Bardoe (Abrams, 2010)

You Wouldn't Want To Be a Mammoth Hunter!: Dangerous Beasts You'd Rather Not Encounter, by John Malam (Franklin Watts, 2004)

Dinosaurs came way before the time of the La Brea Tar Pits, but the store sells plenty of dino titles, too. More books from the Page's store here. 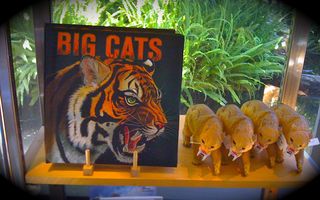 High on the list of All Things LA are cars! During our southern California vacation, Junior loved counting the Bentleys, Maseratis, Rolls Royces, and Lamborghinis. (We were staying near Beverly Hills.) Our Angeleno friends knew the perfect place to take him: the Petersen Automotive Museum of classic cars. Combined with a long stop at the La Brea Tar Pits, a visit to the Petersen made a grand Saturday for our ten-year-old guy.

The third floor of the museum is devoted entirely to exhibits for children, and offers several well-stocked bookshelves, where a kid (or kid and parent) can grab a book and plop down on the floor and read. Some of the car- and vehicle-related picture books available are 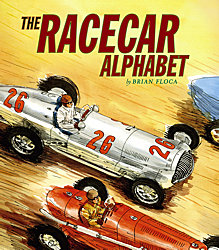 Barracca, Debra and Sal. The Adventures of Taxi Dog.

Peet, Bill. The Caboose Who Got Loose.

Shaw, Nancy. Sheep in a Jeep.

Van Dusen, Chris. If I Built a Car.

"The Story of a Fierce Bad Rabbit" and Other Childhood Tales This morning I happily turn over the blog to my friend Michelle Turner, who also took the beautiful pictures. (Photographs copyright © 2010 by Michelle Turner. All rights reserved.) —ST The few books I have from my childhood, along with a couple of my husband’s, occupy a small stack on our fireplace mantel. These volumes weren’t necessarily my childhood favorites. My copies of Eloise and The Poky Little Puppy didn’t survive through adolescence, and The Tall Book of Christmas is too, well, tall to fit nicely in the stack. But two books offering sound advice to my three-year-old-self definitely have their place. Joan Walsh Anglund’s A Friend Is Someone Who Likes You (inscribed “Happy Birthday, Michelle. Three years old - 1962. Mama and Daddy”) taught me that “everyone ... everyone in the whole world has at least one friend.” And Ruth Krauss’ A Hole Is to Dig, with charming illustrations by Maurice Sendak (more than a decade before Where the Wild Things Are), reminds me, among other things, that “[b]uttons are to keep people warm” and “[a] floor is so you don’t fall in the hole your house is in.”

The endpaper of The Story of a Fierce Bad Rabbit has been ripped out, so I don’t know how old I was when I got it. While my recommendation of this book horrified a friend when her daughter was young, as a girl I loved the “savage”-whiskered bad rabbit’s carrot stealing (“He doesn’t say ‘Please.’ He takes it!”). And I don’t remember being troubled at all by the appearance of the “man with a gun.” Compared to the torments inflicted on bad children in some fairy tales, the bad rabbit got off easy.

Speaking of bad children, at the bottom of my stack of childhood books is the one that remains most vivid–a 1945 version of Andersen’s Fairy Tales, beautifully and terrifyingly illustrated by Polish artist Arthur Szyk. My mother received the book, along with a companion version of Grimm’s Fairy Tales, as a Christmas present in the 1940s. (Someone in my husband’s family must have also, because our set came from his parents.) These tales, and their illustrations, are dark and grisly. A recurring theme in Andersen’s stories is the consequences befalling the vain and ungrateful child. There is hardly one more wicked than little Inger in “The Girl Who Trod on a Loaf,” and its powerful message remains with me today. Be a good, kind, considerate girl—or you’ll wind up with snakes in your hair, toads in your dress folds and wingless flies creeping across your face.

Michelle Turner, a practicing attorney and librarian’s daughter, lives with her husband, Steve, two British Shorthair cats, numerous chickens and an impressive assortment of books on about 14 acres of former Kentucky tobacco farm. Michelle and Steve blog, mostly about food, at Gourmandistan. 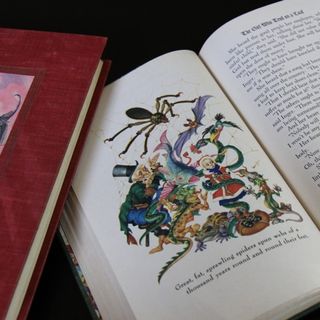 I don't have a poem today, but I'd be remiss if I didn't mention the review of the children's book Poultry Poetry at the blog Seven Impossible Things Before Breakfast. Julie Danielson writes,

So, these poems, which never really miss a beat (in more ways than one, though I initially meant in terms of meter), are pure silliness. But what I love is the sort of demented, quirky, even almost dark notes some of them strike (very subtly)[...]

Here is a picture of our own backyard poultry, Fuzzy the Hen, trying to look big and scary and worthy of a poem. 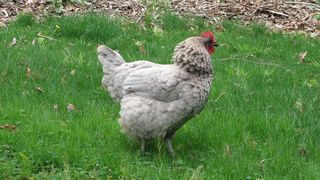