New Boss at the Coop 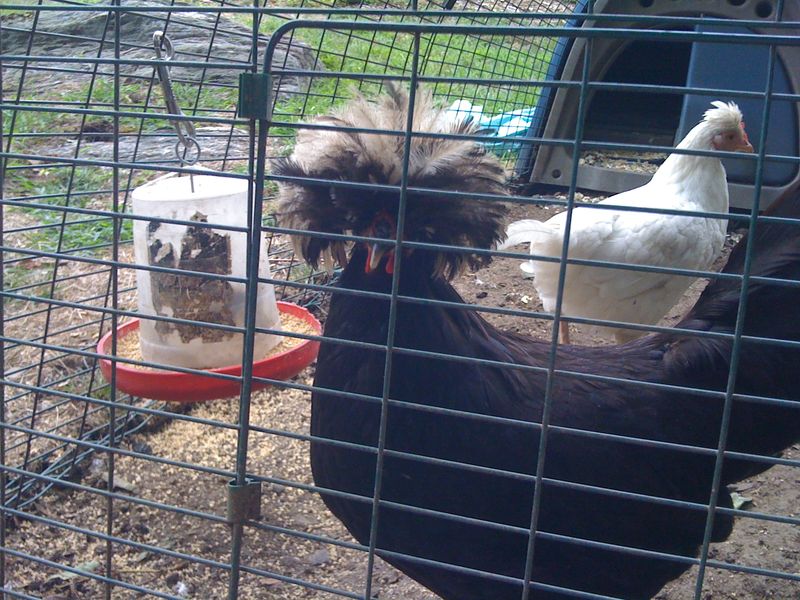 Lordee. It's been a summer of change at the backyard chicken coop. We lost Fuzzy the Wonder Chicken to a predator. Lovey the White Crested Black Polish hen, above, took the loss in stride, while we humans were very sad. Lovey stood up straighter than she ever had before. Some of her bouffant grew back. (Fuzzy, you never fessed up to feather plucking.) 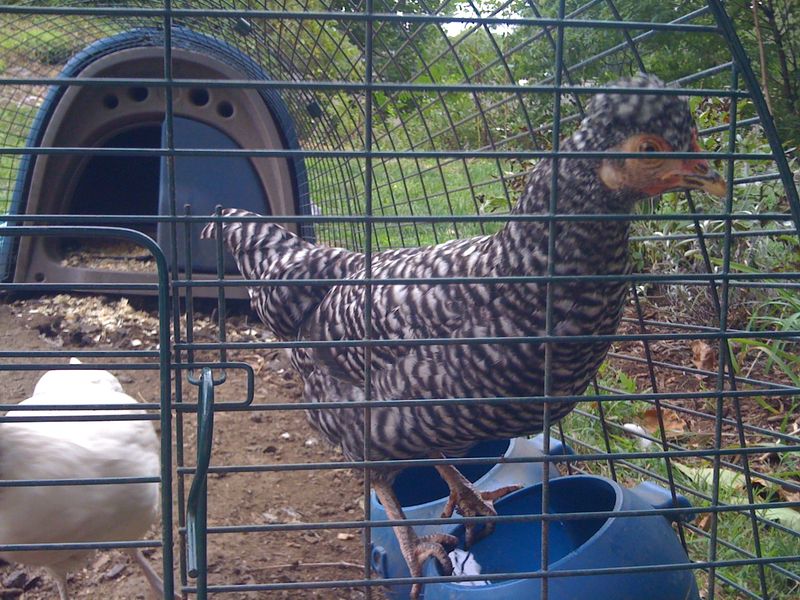 Loretta Lee II. Our second chicken named Loretta. I hope this one does not crow. 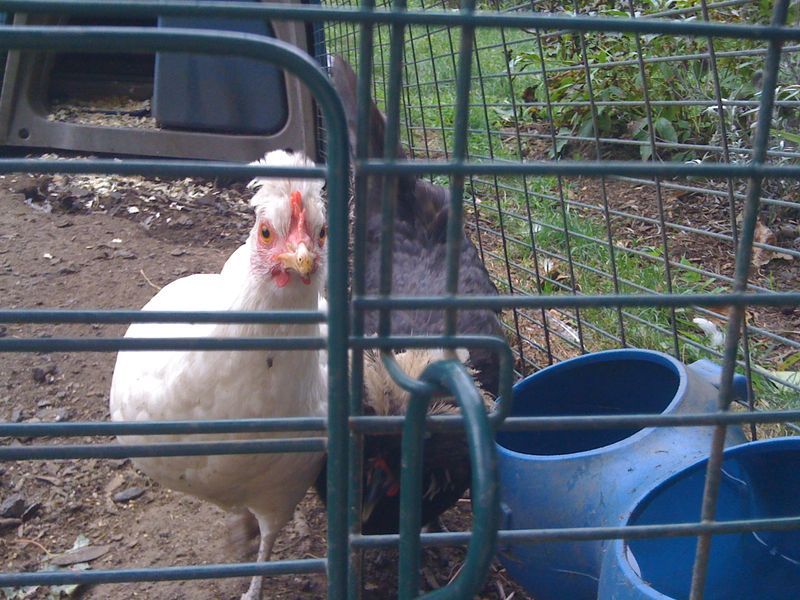 Pecking order is literal. Lovey pecks the new girls fairly often, reminding them who's in charge. At night they all squeeze into the covered portion of the coop.

This afternoon I cleaned out the coop, and put fresh bedding in the nest box. Queenie and Loretta are too young to lay eggs, but I encouraged them to check it out.

Lovey led the way toward sleeping quarters. Queenie and Loretta followed behind cautiously.

They all stood at the doorway...

and began to eat the bedding.

Eating the bedding!?
...you're going to have the WEIRDEST flavored eggs, ever...

Pecking order always intrigues me; really, it's like families, every chicken has a role to play...!

Yes, the bedding! What a bunch of kooks. Never a dull moment with a coop in the yard. Tanita, when you're back in CA, I hope you get some chickens.

OK Susan-so what did you do with the guano? :)

What breed are they? The Queen looks Barred-Rock-like, but do I see a little crest?

Yes, both have a little crest! I think they are both half Polish/half Barred Rock. I'm pretty sure they're also bantams, although they're not super tiny. The new ones grew up with their mother (the Barred Rock) in a barn--and weren't handled from chick-hood by a person. Consequently they're much more high-strung around people than Fuzzy was and Lovey is. But I'm trying not to hold that against them...

Good to get caught up on the chicken news from the summer!

Mary Lee, since I published this, Loretta crowed. Can you believe it? The second Loretta of ours to crow. He will be moving back to his more rural hometown next weekend! I think we will wait to get other hens at the big chicken show (the Northeastern Poultry Congress) in January.

Lovely is quite a sight! Lita and I actually went to a rare breed poultry farm in the Cotswolds (England) a few years ago and we have a bunch of pictures of some White Crested Polands -- we might even have a few small paintings or sketches. Looks like a coop in the yard is quite fun!

Isn't she funny, Dave? She is molting right now and lost her tail. And her crown of feathers looks awful. In a week or so, she will be ready for another closeup, though.

A rare breed poultry farm--I would love that! We have such a good time with the coop in the yard, although tragedy strikes occasionally. Chickens are very vulnerable little pets; everything (raccoon, fox, hawk, coyote, etc.) wants a chicken dinner.