Home Archives Profile Subscribe
On the 50th Birthday of "Green Eggs and Ham"
More Best Books, This Time from Australia

Top 6 Things About "The Strange Case of Origami Yoda" 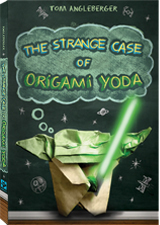 From my son, a soon-to-be sixth grader:

4. The straw holes in a hamburger thing.

The card-catalogue-description basics: "Sixth-grader Tommy and his friends describe their interactions with a paper finger puppet of Yoda, worn by their weird classmate Dwight, as they try to figure out whether or not the puppet can really predict the future. Includes instructions for making Origami Yoda."

Posted at 10:19 AM in Intermediate Readers, Young Adults | Permalink | Comments (8)

Such a great review -- makes me want to go out and get a copy!

Michelle, thanks for the nice words! The book is so funny, and you don't even have to know much about Star Wars.

Have you read Sherman Alexie's YA novel The Absolutely True Diary of a Part-Time Indian? That one is great, too.

Your son is the first person ever to mention the straw bit! Has he tried it yet?

Thanks so much for this! It means a lot!
-Tom

That's such an awesome-sounding book -- I knew it would be a sure hit with young guys. I wish I'd seen Mr. Tom at the ALA thing -- so many people I did get to see yet I missed so many in the swirl of Oh-dear-Lord-look-at-all-these-people panic. Still - can't wait to read this one! And I love that there are origami instructions for this little guy!

Tom, oh, yes, he definitely used to spear his hamburger in the cafeteria! (He claims to have eaten it out of the straw, but I'm skeptical.) The kiddo thinks that part is fall-down-laughing funny. I have to read it over and over.

What fun we had reading your book together. Thank you!

Tanita, we keep reading favorite bits and laughing all over again. The tiniest, seemingly throw-away lines are priceless.

This sounds like the perfect book for me to read to my four boys. Although, I bet my oldest would be sneaking it off to read all by himself. Thanks for a great review!

We are doing a giveaway at Bookscoops for another fun book, although it's geared toward a much younger audience, I think you'd like it too.

I hope we get this one in our library!

Holly, Otto Grows Down sounds like a hoot. I'll have to look for it!

Suzanne, definitely find this one. So funny.