The Most Dangerous Rumors

"During times of crisis or uncertainty, people often resort to rumors, or stories ciruclated without facts to confirm the truth, to help them cope with anxieties and fears. Of all the rumors, racial and hate rumors are considered the most dangerous because they are divisive and create hostility that can lead to violence."

—Susan Campbell Bartoletti, writing about the 1866 founding of the Ku Klux Klan, in They Called Themselves the K.K.K.: The Birth of an American Terrorist Group (Houghton Mifflin, 2010)

Bartoletti's new book is a nominee in the Middle Grade/Young Adult Nonfiction category of the Children's and Young Adult Bloggers' Literary Awards (the Cybils). 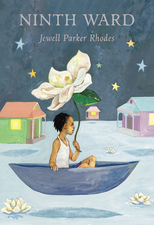 "TaShon, his arms spread wide, twirls like an airplane. Spot barks and chases his tail. I lift the hose high; water falls like a soft summer shower.

"There is sweetness to this day.

"I thought this day was going to be ordinary. but it was full of surprises: Andrew, TaShon and Spot, and Miss Johnson saying I could be an engineer."

That's 12-year-old Lanesha talking. She lives with her surrogate grandmother, Mama Ya-Ya, in New Orleans' Ninth Ward. In the above passage, she is describing a day just before Hurricane Katrina hits.

Reviews at Charlotte's Library and The Happy Nappy Bookseller.

Nominate the Best Children's and Young Adult Books of the Year

Everyone can nominate a book for the Children's and Young Adult Bloggers' Literary Awards (the Cybils) at the website. You do not have to be a blogger to nominate.