For several years I was a reading buddy for first graders a public school; I listened while children who needed to practice read to me. We chatted a lot, too. I loved my time with six and seven year olds.

This year I talked my way into a couple of new volunteer jobs in two different city schools. I'm a mentor to a child in one; we eat lunch together, play games, chat (recurring theme, that chatting), and I try to act mentor-ish, dispensing advice like "be sure to eat that applesauce! Yum!" We may read books at some point, but for now we're having fun with Candyland, which I lost five times in a row last week.

Then, because I love reading aloud, I found a gig as a story lady for a second-grade class at another school. These second graders are well-read! On my first visit, they reeled off names of authors they like, and everyone was eager to talk about books. My kind of people. I read The Three Cabritos, Eric Kimmel's Tex-Mex version of the Three Billy Goats Gruff, which features a chupacabra instead of a troll. The second graders liked that one so much that I returned the next time with a more traditional version of the tale, by author-illustrator Paul Galdone. 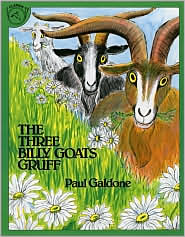 I don't know if you're familiar with Galdone's book, but his troll is one ugly son of a gun. You just know he'd stink. His teeth are very yellow, which grossed out and intrigued the second graders. When I finished reading the book, we had some time to chat. The word "disgusting" kept coming up. One girl said, "If I was the second  billy goat, I would have taken a toothbrush and brushed that troll's teeth!" Many nodded thoughtfully at that comment. I hope she'll write that version of the story; I'd love to read it!

So, these are volunteer gigs, and they just let you do them? How cool is that??

Tanita, the financially struggling city nearby has a longstanding School Volunteer office. There are a number of programs where people can volunteer: book buddies, tutors, mentors, and so on. Some of the children come into the school system already behind their peers from more affluent areas, and some schools are short-staffed, with teachers given large classes. The system is trying to get the kids up to speed as best they can. Although I was making light of it, the office does screen (I passed! I passed!); I'm really happy that there's an organized way to volunteer and share books. Some time back I decided that it wasn't enough for me just to talk books; I needed to DO something. I love it. (I do miss the first graders.)

Michelle, the second graders are like college students compared to first graders. I was so surprised at the difference in maturity.