Yo, There's a Camel in the Humvee 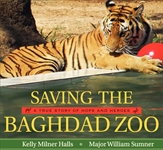 ...[M]y convoy was a rolling menagerie conisisting of three agitated rhesus monkeys, a drowsy hyena, an angry swan, several pigs, a number of goats, three porcupines, a full-grown pelican, a collection of underfed dogs, and a camel named Lumpy, who was strapped down in the back of one of our troop carriers. Everyone was tense, and Lumpy was no longer amused by his personal tour through the heart of Baghdad...

Can you imagine? Transporting zoo animals through a war-torn city! A 64-page picture book for readers nine and up, Saving the Baghdad Zoo documents the successful 2003 efforts by the U.S. Army, local residents, and international helpers to preserve part of Iraq's national heritage.

The "exercise in compassion," as Major Sumner termed it, makes a strong photo essay, and the authors include a thorough bibliography, source notes, and an index. It's a great choice for the many readers interested in animal welfare.

Posted at 06:00 AM in Intermediate Readers, Young Adults | Permalink | Comments (2)

I had the pleasure of hearing Kelly Milner Halls speak about the genesis of this book (as well as many other fascinating things) at a SCBWI meeting recently. She's an amazing person---if you ever get a chance to meet her or hear her speak, jump at it!

Lissa, this is such an interesting story! I really enjoyed it.