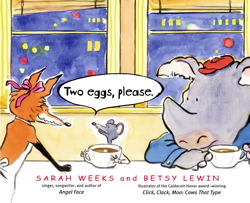 The August 10 for 10 project, a roundup of picture books that teachers use in the classroom, spins out lots of good ideas for new read-alouds. And so does the Fairfield Parent article "Leap Off the Page," about books set in New York.

I may be too late for August 10 for 10 (it's August 11th, after all), but here is a list of our favorite picture books about NYC. I have read each one of these books out loud countless times to my son, and would take them to the second grade class (where I'm a volunteer reader) in a heartbeat. Also, don't miss the blog Storied Cities, with the tagline "Reviews of Decidedly Urban Illustrated and Chapter Books for Children," for even more New York suggestions.

The Philharmonic Gets Dressed, written by Karla Kuskin and illustrated by Marc Simont (Harper & Row, 1982)

The True Story of Stellina, by Matteo Pericoli (Knopf, 2006)

The Man Who Walked Between the Towers, by Mordicai Gerstein (Roaring Brook, 2003)

The Adventures of Taxi Dog, written by Debra and Sal Barracca, and illustrated by Marc Buehner (Dial, 1990)

Fireboat: The Heroic Adventures of the John J. Harvey, by Maira Kalman (Putnam, 2002)

The Snowy Day, by Ezra Jack Keats (Viking, 1962) An exhibition devoted to Keats' work starts at the Jewish Museum, 1109 Fifth Avenue, on September 9th and runs through January 29th.

Thanks for mentioning me! I just discovered my new favorite NYC book: Chicken and Cat.

You're welcome! I will look for Chicken and Cat--sounds like my kind of book.

One of my favorites is Christoph Niemann's Subway