Books for One Seventh Grade Boy 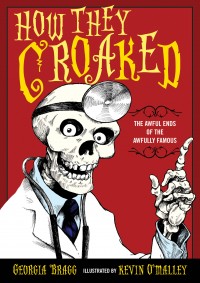 Our seventh grader does not jump up and down with wild abandon when we hand him a book and say, "You'd like this." However, leaving intriguing-looking titles lying around to be "discovered" often works like a charm. Author Melissa Wiley once called this "strategic strewing."

Here a few books that happen to have been left out on the couch and in someone's favorite chair last spring and summer. I go by J.'s interests more than reading levels. Levels, schmevels.

Amulet #4: The Last Council, by Kazu Kibuishi (Graphix, 2011) The latest in a popular series of graphic novels. J. actually turned off the computer to read it.

How They Croaked: The Awful Ends of the Awfully Famous, written by Georgia Bragg and illustrated by Kevin O'Malley (Walker, 2011)

Impressed by kids who substitute blog for their parents, I asked J. how he'd describe this book for people who hadn't read it.

"It's about how some famous people died," he said.

"Anything you want to add?" I asked.

Darth Paper Strikes Back: An Origami Yoda Book, by Tom Angleberger (Amulet Books, 2011) Like its predecessor, The Strange Case of Origami Yoda, this is a funny book with a middle-school setting.

Oil Spill! Disaster in the Gulf of Mexico, by Elaine Landau (Millbrook, 2011)

What to Expect When You're Expecting Larvae: A Guide for Insect Parents (and Curious Kids), written by Bridget Heos and illustrated by Stephane Jorisch. "Whether your babies are wriggly maggots, fat grubs, or fuzzy caterpillars, your larvae will look different from you." Geared to elementary-school-age children but the almost-12 J. still read it with appreciation. I think the title of the informational picture book is hilarious.

Can I See Your I.D.? True Stories of False Identities, by Chris Barton. Like How They Croaked and the next book, it was one of the great suggestions on the Westport (CT) Library's 6th grade summer reading lists.

Queen of the Falls, by Chris Van Allsburgh (Houghton Mifflin, 2011). I picked up my own strewn book and read it out loud. Fantastic! A widow in need of money decides to go over Niagara Falls in a barrel. Dude, that's crazy. And it's true.

Books I plan to "strategically strew" (but haven't yet seen)

America Is Under Attack: September 11, 2001: The Day the Towers Fell, by Don Brown (Flash Point/Roaring Brook, 2011) Reviewed at The Nonfiction Detectives.

Trapped: How the World Rescued 33 Miners from 2,000 Feet Below the Chilean Desert, by Marc Aronson (Atheneum, Simon & Schuster, 2011) Reviewed by Betsy Bird at School Library Journal's A Fuse #8 Production.

The Elephant Scientist, by Donna M. Jackson, Caitlin O'Connell Rodwell, and Timothy Rodwell. A new book in Houghton Mifflin's Scientists in the Field series. Another one that sounds good, Loree Griffin Burns' Citizen Scientists, is due out early next year.

Great list and very witty. Thanks for this. I'm going to do some strategic planting now.

You're welcome! I hope your reader enjoys some of the books.

What to Expect When You're Expecting Larvae sounds like one I should probably get for the library. Hilarious title.

Yes, an inventive spin on insect life cycles. The author said on Twitter that Joeys and Crocodiles are next in the series.

I still laugh about the title.

Very funny! Enjoyed your post and your son's comments!

Thanks, Leslie! It looks like I'll be waiting a while for the progeny (all one of him) to guest blog.

Wait until he's in tenth grade. Surly Teen Boy will only read if I assure him he will love the books and then beat him about the head with them. the only comments I get when he is finished are grunts. And his language arts teacher, to help encourage a love of literature, is having his class read East of Eden and The Help. ARGH!

I really like Jr.'s school but it uses the Accelerated Reading program, which does not work for him.