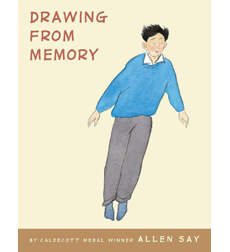 Allen Say won the Caldecott Medal, our country's highest honor for children's book art in 1994, and he may win it again for his latest work, Drawing from Memory. Some prize-watchers have also mentioned the book in regard to the Newbery, the equally prestigious award for writing.

In this picture-book memoir, Say (b. 1937) looks back at his childhood in Japan, with a particular focus on his apprenticeship with Noro Shinpei, a famous newspaper and magazine cartoonist. Say began working with Shinpei at the same time that he moved into his own apartment in Tokyo—as a middle-school student. The author is remarkably nonjudgmental about the family decision that led to his solo move at age 12. "I was dazed with happiness..."

Drawing from Memory is a beautifully produced book, which, like some of Say's other work (Tea with Milk, Erika-san), appeals as much to adults and older teens as it does to children. Perhaps even more so. A high-school senior we know is going to art school next year, and I keep thinking that Drawing from Memory is the perfect gift for him.

Say uses watercolors, pen and ink, pencils, photographs, and quite a bit of text (at 64 pages, Drawing from Memory is very long for a picture book) to tell the story, and, reflecting his work with Shinpei, Say renders some of the illustrations in sequential panels.

Allen Say left Japan for the U.S. in 1953; today he lives in Portland Oregon. He writes in an author's note that Drawing from Memory let him "journey through my memories of becoming an artist." How lucky for us readers that he invites us on the trip!

On Mondays a number of children's book blogs post about nonfiction. You can find the roundup of entries today at Jean Little Library.

I've seen quite a number of reviews about this book, and needless to say I am intrigued. While I know that Say and (Shaun) Tan have very distinctive artistic styles, I could see their similarities and how they draw from the richness of their cultural background and heritage to produce stunning masterpieces such as this one. And we already have it in our libraries here in Singapore! I just checked - it must have just arrived recently. Will definitely borrow it. Currently on-loan. I'm sure this would be a huge hit.

Thanks for this recommendation. I love using Allen Say's books with student-teachers and recommend Grandfather's Journey and Tea with Milk all the time. Great curriculum tie-ins.
Tammy
Apples with Many Seeds

Myra, Drawing from Memory is wonderful, and I was so surprised at some of Allen Say's story. I'm also a fan of his book Kamishibai Man.

Tammy, Travis at 100 Scope Notes mentioned that The Inn-Keeper's Apprentice covered some of the same ground. I definitely want to check that one out, too. And I love The Bicycle Man.

One of my favorites was The Bicycle Man, so I'll definitely have to see if I can find Drawing from Memory in our local library. These books can appeal to a wide age-range, even to adults.