Makes one think, eh? The quote, which refers to late 19th-, early 20th-century immigrants, comes from Ann Bausum's excellent Unraveling Freedom: The Battle for Democracy on the Home Front during World War I (National Geographic, 2010). I nominated the book for a 2011 Children's and Young Adult Bloggers' Literary Award in the middle grade/young adult nonfiction category. Unraveling Freedom makes a good companion to The War to End All Wars: World War I (Clarion Books, 2010),  written by Russell Freedman for children in the same age range (12+). 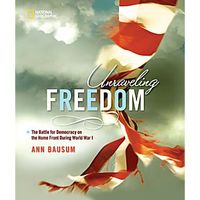 Sounds like a very good book for this time period in our country. I have yet to finish nominating Cybils books; working on my list today. You've inspired me!

Andi, there are so many parallels to today! I found it all very interesting and relevant to our current political climate.

I'll be interested to see what you nominate. I really do like finding new (to me) books through the Cybils.

Hmmm. That sounds JUST LIKE NOW.
It's ironic how many instances of people repeating themselves - and history repeating itself - I've run across lately.

And I nommed for the Cybs nonfiction a graphic novel on astrophysics... but I'm not sure if it fell into graphics or nonfiction. I hope nonfiction; the judges might enjoy some books with great drawings!

Tanita, it sure does sound like NOW! I agree. Before reading the book, I did not realize that anti-German sentiment played into Prohibition. Most of the brewers were German-American. Now I have to watch the Ken Burns documentary on Prohibition and read Karen Blumenthal's Bootleg: Murder, Moonshine, and the Lawless Years of Prohibition, another 2011 nonfic. for teens book.