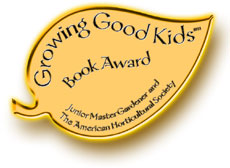 The Junior Master Gardener Program and the American Horticultural Society announced the winners of the "Growing Good Kids" Book Awards on July 20th. This year's blue-ribbon crop is as follows:

For more information about the prizes, which honor "engaging, inspiring works of plant, garden, and ecology-themed children's literature," go to the Junior Master Gardener website. Don't miss the list of classics, which includes Miss Rumphius, The Lorax, Too Many Pumpkins, among many others.

I've been catching up with the last few months' announcements of awards for children's books, and added some to the page "2011 Best Children's Books: A List of Lists and Awards." (The honored books were first published in 2011.)

Minnesota Book Awards. These honor mostly titles for adults, but do feature one category for kids' books.

Updated to add: Posted today, the Horn Book's "Mind the Gap Awards," for books that should have gotten more honors. Plus, the Amelia Elizabeth Walden Award finalists were announced by the Assembly on Literature for Adolescents (ALAN) of the National Council of Teachers of English (NCTE).

Lots of good reading ahead!

Some years back I spent a grand Fourth of July sitting  in a long line for free Shakespeare in the Park in NYC. To get into the play, you had to line up early and wait until 6 or so when the Delacorte Theater handed out evening's allotment of tickets. I forgot what we saw, though I remember loving the play; maybe it was "Much Ado About Nothing" or "Twelfth Night." Several people in our group had brought along bags of fresh cherries, which arrive in plenitude in the city's Korean delis around the first of July. We snacked, shot the breeze, and let time drift by until the ticket guy appeared. I'll always associate the happy feeling of friends, Shakespeare, and cherries with the Fourth.

On the Fourth this year I finished reading the history play "Henry IV, Part 1," and also stumbled across Oxford's Emma Smith's free online lecture about Falstaff, the play's most interesting character. Smith even compares the "fat-kidneyed rascal" to Homer Simpson! Both are funny because they're countercultural, she says. The talk is part of the "Approaching Shakespeare" series of podcasts, which can be found here.

Emma Smith figures in Me and Shakespeare: Adventures with the Bard, by Herman Gollob, a Texas-born book editor (Doubleday, 2002). Seeing Ralph Fiennes in a Broadway production of "Hamlet" changed Gollob's life, and he began to study Shakepeare on his own. Part memoir and part guide, Gollob's book is full of good recommendations (particularly for books and films) for people who want to deepen their appreciation of the Bard. Gollob's adventures include a three-week summer course at Oxford taught by...Emma Smith.

A local company is performing an outdoor "Romeo and Juliet" soon, and that will probably be my next brush with Shakespeare. The Washington State cherries have hit the stores, too.

Shakespeare in the Park (now celebrating its fiftieth anniversary)

"Shakespeare After All: The Later Plays," with Marjorie Garber. A free video series from the Harvard Extension School. I haven't seen this yet, but it sounds great.

Shakepeare on the Sound. The Bard in the 'burbs.

This summer I'm spending some time thinking about the picture books I will read to next year's second-grade class. My volunteer gig at an ethnically and economically diverse city public school is an all-time favorite activity of mine, but I'm always looking for ways to improve the experience for the children. When fall rolls around, I'd like to be better prepared with a strong list of books and additional background reading of my own.

Keeping in mind prior classes will help, too. For example, when we talk about "fiction" and "nonfiction," I'm going to put the words out on index cards so the children can see them written out. In lovely and heartfelt thank-you notes from the last group, a couple of the spellers-by-ear thought I was saying "fishin" and "nonfishin," which is adorable, but note cards will go a ways to clearing that up.

In terms of selecting books, this terrific list, among others, will come in handy: "50 Multicultural Books Every Child Should Know,"  from the Cooperative Children's Book Center, at the University of Wisconsin. It offers a good selection of titles, broken down into age groups ( "Preschool," "Ages 5-7," etc.). I wish I'd remembered to read Uncle Peter's Amazing Chinese Wedding to the 2011-2012 students. Reading through these books this summer should be fun!