The Caldecott and Newbery Medals, the two most prestigious awards for US children's literature, will be announced tomorrow (Monday, January 28th) morning at a meeting of the American Library Association. Details here.

Author/librarian Elizabeth Bird speculates about who might win, over at the blog A Fuse #8 Production,

A number of other prizes for kids' books will be announced, too.

Meanwhile, here are some book-related accolades from other organizations:

Edgar Awards. Sponsored by the Mystery Writers of America. Nominees in a number of categories of books, including juvenile and young adult.

Orbis Pictus Award. For "outstanding nonfiction for children." Sponsored by the National Council of Teachers of English (NCTE). PDF file.

Sydney Taylor Book Awards. Given by the Association of Jewish Libraries. (PDF document)

Do I have
permission
to post an entire work, a photograph, a painting by
a poet? A lyricist? An artist?
Public domain? What's that?
Fair Use? Who's she?
Is Intellectual Property
really that smart?

There's the Cardinal.
Copyright & Fair Use at the Stanford University Libraries.
And Gov.
US Copyright Office at the Library of Congress
Go, Gophers.
Understanding Fair Use at the University of Minnesota Libraries.
Plus Eff.
Electronic Frontier Foundation, Legal Guide for Bloggers.
Then CC.
Creative Commons.
Not to mention
Google.
Blogger copyright tips.

A college is even offering
a free course on
copyright, but I missed
the deadline. 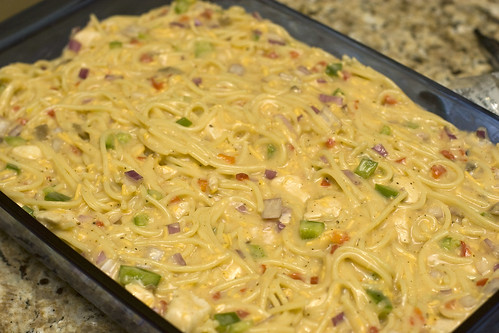 Although we take satisfaction in being a safe place for people to tell their stories, please don't get the impression that running a bookshop is all bittersweetness and light. Much of it is dusting and heavy lifting.

A charming tale of "friendship, community, and the uncommon pleasure of a good book," this memoir is about two newcomers to a small Appalachian town who open a used book shop. Wendy Welch writes with compassion and smart-ass humor as she describes her and her husband Jack's adventures in "being independent booksellers in the face of big-box stores and e-readers." I thoroughly enjoyed The Little Bookstore, and had to finish it in a hurry as my eightysomething mother had already asked me twice to borrow the book.

The Cooperative Children's Book Center at the University of Wisconsin-Madison announced the winner of the 2013 Charlotte Zolotow Award, which honors picture book text: Each Kindness, written by Jacqueline Woodson and illustrated by E.B. Lewis.

I plan to share Each Kindness with the third graders and maybe with a couple of fourth-grade friends whose class is having troubles getting along. Monica Edinger, a fourth grade teacher in New York, reviewed the picture book at her blog, Educating Alice, citing its "exquisitely spare and poetic prose."

Over at Booklist's Audiobooker blog, I came across a great roundup of lists of best audiobooks of the year. In the Guardian I see that there's a new collection of Ian Fleming's first seven James Bond novels. Wouldn't that be cool to listen to in the car?

Right now J. (age 13) likes the audio version of Cornelia Funke's Inkheart, a highly praised middle-grade fantasy from 2003. (I chose it from The Librariest's Top 20 Children's Audiobooks.) But while I appreciate Lynn Redgrave's narration and accents, by turns tony and sinister, sometimes I think that if I hear the word "book" again I may scream. Books, the love of books, book binding, book collecting, book thievery, etc., all figure into the story. Bookbookbookbookbook. Anyway, the plot is about to pick up, so perhaps that will distract me.

A favorite of ours last year was The Watsons Go to Birmingham—1963, written by Christopher Paul Curtis and read by LeVar Burton. Funny, sad, and thought-provoking, this autobiographical middle-grade novel details an African American family's road trip from Michigan to Alabama during a troubled time in our country's history. The Watsons was a Newbery Honor book back in 1996. 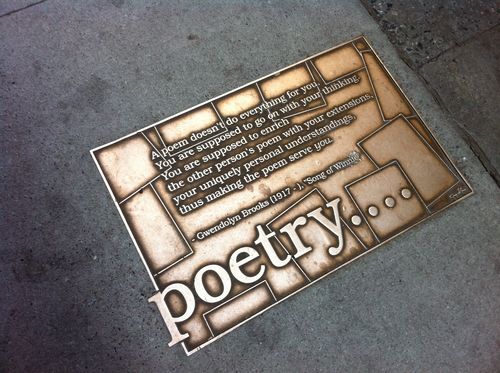 In case you're reading this post on a mobile phone, the above work of art reads,

The sidewalk on the south side of 41t Street leading up to the New York Public Library on Fifth Avenue is called Library Way, and contains many of bronze plaques like the one above with quotations about literature and writing. Sponsored by the New York Public Library and the Grand Central Partnership, Library Way stretches from Park Avenue to Fifth, and was created by the artist Gregg LeFevre.

The Gwendolyn Brooks excerpt is about poetry, sure, but it's also an extended metaphor, encouraging an active engagement with life and the world around you. That's why I liked it so much, and took a picture one sunny morning last summer.

For other poetry posts this morning, see the roundup at Radio, Rhythm & Rhyme.

At the start of the school year in September, I found out that Ms. B. had moved up from 2nd grade to 3rd. Ms. B. was the teacher in the public school classroom where I read picture books aloud for the last two years, and I insisted on following her she invited me along to Grade 3. I happily made the switch. Ms. B. runs an efficient class in which the children seem happy, and she treats her students with respect. There are 30 kids in this year's group, much too big a contingent for the reading rug, which is both good and bad. No more elbow wars among the back-row listeners, but harder for everyone to see the pictures in the book. I try to walk around alot.

Because of weather and consequent half days, delayed report-card conferences, and so on, I've been lucky to read once or twice a month. (As a volunteer, I aim for weekly.) But we've still had a good time. Well, except for the day I read Mrs. McTats and Her Houseful of Cats, a Seussian tale of stray felines, when guffaw-inducing descriptions of dog house-training challenges (completely unrelated to the book) overtook the post-reading discussion. It happens.

Several weeks before, the class and I had had the most fantastic conversation about It Jes' Happened, Don Tate's picture-book biography of Bill Traylor. A self-taught artist and former slave, Traylor (1854-1949) began creating his art in his eighties, drawing from his memories of the Alabama farm where he had grown up and lived. The kids were intrigued, and had lots to say about the book. Since they're citified Northeasterners, I explained what a mule was; the donkey-horse crosses and other animals were some of Traylor's favorite subjects. Ms. B. turned to the computer-connected Smart Board projection system and showed some examples of Traylor's work.

One boy wanted to know about Traylor's wife: "Is she dead?" (A very third-grade response. I remember my 13-year-old at the same age.) Others wondered what happened to Traylor's children. Were author Don Tate and illustrator Gregory Christie his sons? (No, but wouldn't that be cool?) They puzzled over Traylor's living circumstances; he was homeless at times in Montgomery, AL, and sometimes bedded down in a funeral parlor. Many seemed amazed (and relieved) that museums now held many pieces of Traylor's art.

As I was leaving the class, one of the girls pulled me aside, and quietly asked, "Are mules really real?" "Yes, " I whispered back. "They are." I loved the idea that someone thought that the hardworking farm animals were in the same magical realm as unicorns and dragons. Maybe Traylor thought so, too.

For additional information, see  "Guest Post: Don Tate on 'It Jes' Happened: When Bill Traylor Started to Draw," at the blog Cynsations, and "Jes' a Hit: An Interview with Don Tate," at The Brown Bookshelf.