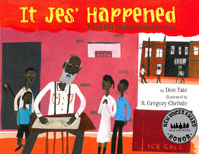 At the start of the school year in September, I found out that Ms. B. had moved up from 2nd grade to 3rd. Ms. B. was the teacher in the public school classroom where I read picture books aloud for the last two years, and I insisted on following her she invited me along to Grade 3. I happily made the switch. Ms. B. runs an efficient class in which the children seem happy, and she treats her students with respect. There are 30 kids in this year's group, much too big a contingent for the reading rug, which is both good and bad. No more elbow wars among the back-row listeners, but harder for everyone to see the pictures in the book. I try to walk around alot.

Because of weather and consequent half days, delayed report-card conferences, and so on, I've been lucky to read once or twice a month. (As a volunteer, I aim for weekly.) But we've still had a good time. Well, except for the day I read Mrs. McTats and Her Houseful of Cats, a Seussian tale of stray felines, when guffaw-inducing descriptions of dog house-training challenges (completely unrelated to the book) overtook the post-reading discussion. It happens.

Several weeks before, the class and I had had the most fantastic conversation about It Jes' Happened, Don Tate's picture-book biography of Bill Traylor. A self-taught artist and former slave, Traylor (1854-1949) began creating his art in his eighties, drawing from his memories of the Alabama farm where he had grown up and lived. The kids were intrigued, and had lots to say about the book. Since they're citified Northeasterners, I explained what a mule was; the donkey-horse crosses and other animals were some of Traylor's favorite subjects. Ms. B. turned to the computer-connected Smart Board projection system and showed some examples of Traylor's work.

One boy wanted to know about Traylor's wife: "Is she dead?" (A very third-grade response. I remember my 13-year-old at the same age.) Others wondered what happened to Traylor's children. Were author Don Tate and illustrator Gregory Christie his sons? (No, but wouldn't that be cool?) They puzzled over Traylor's living circumstances; he was homeless at times in Montgomery, AL, and sometimes bedded down in a funeral parlor. Many seemed amazed (and relieved) that museums now held many pieces of Traylor's art.

As I was leaving the class, one of the girls pulled me aside, and quietly asked, "Are mules really real?" "Yes, " I whispered back. "They are." I loved the idea that someone thought that the hardworking farm animals were in the same magical realm as unicorns and dragons. Maybe Traylor thought so, too.

For additional information, see  "Guest Post: Don Tate on 'It Jes' Happened: When Bill Traylor Started to Draw," at the blog Cynsations, and "Jes' a Hit: An Interview with Don Tate," at The Brown Bookshelf.

I love your classroom stories! You're welcome to come read aloud in my classes ANY time!

That is the sweetest thing I've read in I don't know how long. (Your post, that is. But the book sounds great, too.)

Mules!!!
I so want a Tennessee Walking Mule, or whatever they're called. Trust me - they're up there with unicorns. I love that she knows they're magical, too.

Also, am just SNICKERING at you somehow moving along with this same teacher. Somehow.

Thanks so much, Mary Lee! That means a lot, coming from a teacher. I was back this week, and the children were so quiet. I guess they weren't quite used to being back in school.

Meechelle, that is too kind. Don't you love the idea of mules as some kind of mythical beast? It makes me want to write about about magic mules.

Tanita, I KNOW. Mules! Isn't that the greatest? I have been thinking about them ever since. I'm sure you've read Don Tate's book. I really love it. The illustrations are wonderful, evoking an outsider art feel.