In the book What W.H. Auden Can Do For You (Princeton University Press, 2013), Alexander McCall Smith writes,  "[The poet W.H.] Auden reminds us to be grateful, and that is something that we increasingly need to be reminded of in a culture of expectations and entitlement."

McCall laments a consumerist culture in which we're pushed to complain rather than express gratitude. But "Why not say thank you?" McCall Smith asks.

He goes on to say that Auden's work points us in a appreciative direction because the poems after 1940 "tend to be poems of celebration, written with great charity and with love for the ordinary pleasures of life."

McCall Smith's lovely book is a good one for this season, and reminds me to say thank you, readers, for continuing to visit Chicken Spaghetti. I hope your holidays are grand. 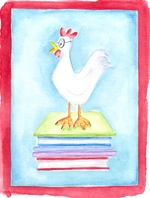