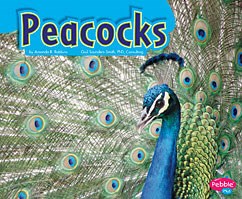 Recently I read the book Peacocks to the second graders, and they had a lot to say about it. The local zoo has some of these beautiful birds, and many of the kids have seen them there. Second graders are less fanciful than first graders, but every year there is someone in the class who chimes in with a tall tale during discussion time. This week not one but two children told us about peacocks who had gotten into cars with them. Logistically such a scenario seems unlikely, considering six-foot tails and all, but who I am to quibble? I usually just say something like, "Wow!" and move on.

I asked the class what other animals they would like to read about, and various students mentioned puppies, kittens, dinosaurs, and sharks. There was a lot of enthusiasm for puppies. Then, beaming, one girl added, "Tarantulas!"