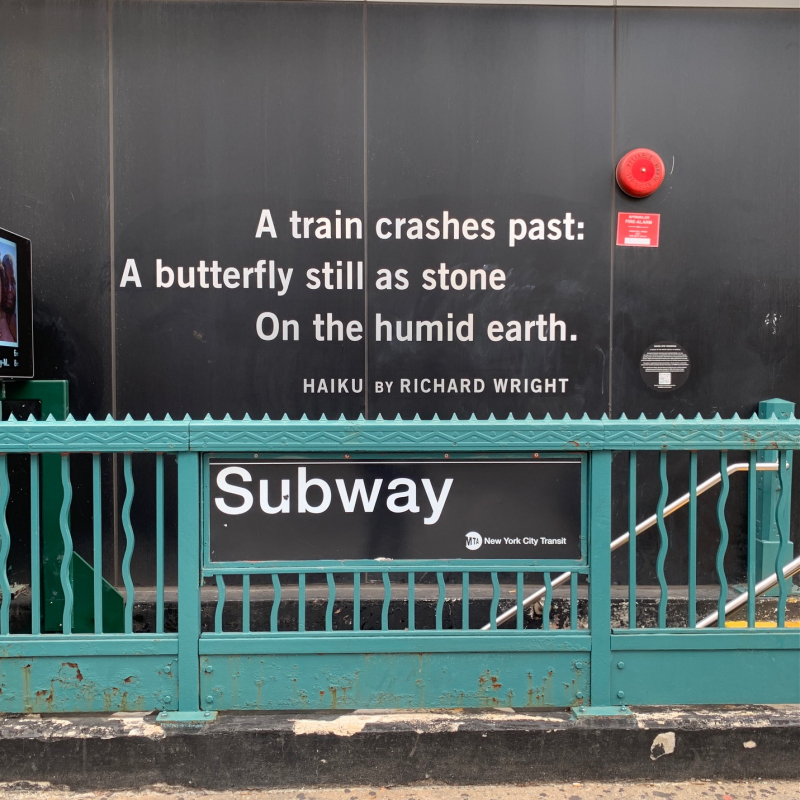 Although I associate the author Richard Wright more with Mississippi (his birthplace) and Chicago (the setting of Native Son), he did live a number of years in New York before moving permanently to France. One of the places he lived, in the 1930s, was on Carlton Avenue in Brooklyn. He used to spend hours writing in nearby Fort Greene Park.

In addition to his works of fiction and nonfiction, Wright wrote some four thousand haiku. Currently the Poetry Society of America is sponsoring "Seeing Into Tomorrow," a project in which seven of these have been turned into public art in and around downtown Brooklyn, not far at all from Carlton Avenue. Several more are on the way, too. I recently spent an enjoyable fall afternoon traipsing around the Borough of Kings to see them.

The poems in the project are reprinted from Haiku: The Last Poems of an American Icon (Arcade, 2012), and in an introduction, Wright's daughter Julia says that writing these poems kept her father "spiritually afloat" during the last years of his life. After seeing the work in Brooklyn, I now want to look at that book! At her School Library Journal blog, Betsy Bird reviewed a children's book about Wright's haiku, also called Seeing Into Tomorrow (Millbrook Press), back in 2018. Featuring the photographic illustrations of Nina Crews, it sounds good, too.

You'll find the Poetry Friday roundup at Reading to the Core on October 1st. 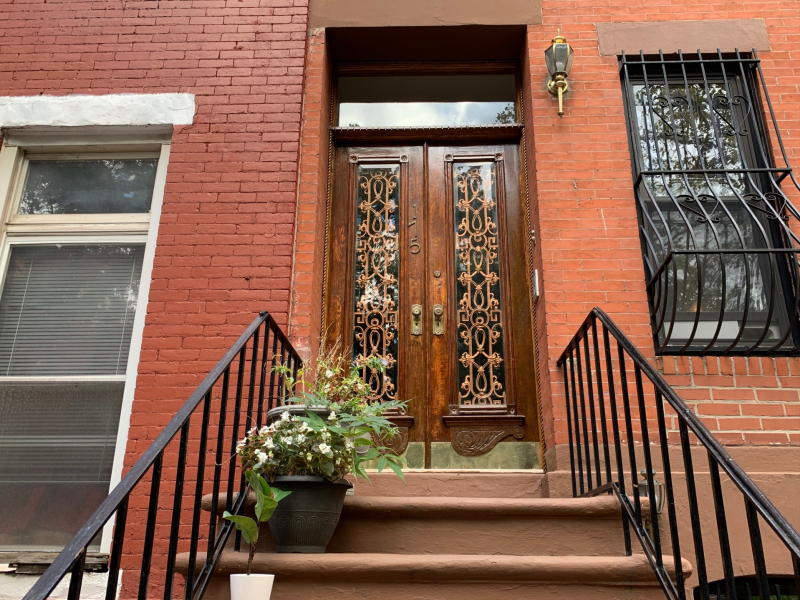 Photos by ST. Upper: Wright haiku at the Jay Street–MetroTech subway station in downtown Brooklyn. Lower: Front door and steps of a building in which Wright lived in the Fort Greene neighborhood of Brooklyn.

I'd love to read this book and would love to see the public art in Brooklyn. How wonderful. The haiku you posted is so powerful, the juxtaposition of the train and butterfly, their violent meeting.

What a breath taking haiku, with that contrast. I don't know Wright's work, but I want to read more now.

I didn't know he wrote haiku! Thank you for this!

Janice, Sally, and Ruth, I just love this project of putting poetry on the sides of buildings. Haiku are just the right size, too.

Susan, thank you for taking me back to New York City. There are places of interest that I do miss there and on Long Island. Wright's haiku is one that shares the unbelievable contrasts in the city both in realistic situations and human conditions. The city is a place of extreme contrasts but the excitement of being there is equally as tantalizing.

Carol, you are so welcome! Such extreme contrasts in NYC--you're right about that. Brooklyn was BUSY on the day I was there. I really wanted to stop by Junior's and get a cheesecake, but the thought of lugging it back on the subway then MetroNorth train stopped me.

I am UTTERLY blown away at Richard Wright writing haiku!! What a find!! And I love the doors of the building where he lived.

Thousands of them! It's so wild. I really enjoyed finding out more about Wright and his haiku when I was mapping out where I'd go on my little excursion to Brooklyn. I really do want to see that book now, too. AND the kids' book, which looks great. Thanks for stopping by, Tanita!

Susan, you have taught us a lot today. I love the haiku by Richard Wright, and that you shared a photo of where he lived. Thank you for your informative post. That "butterfly still as stone" is beautiful.

Thanks for your kind words, Denise! It's a fun project, and I really do like stuff you can see for free, like public art. I admire the forward-thinking, clever people who come up with these sorts of ideas.

Four THOUSAND?!?!? Holy moly. Luckily, our library has the book. I can't wait to dig in. Thanks for showing us and teaching us!

Mary Lee, thanks for reading! I love plotting out a good city adventure, and this one was super fun. As a young person, Wright lived in my hometown, Jackson, Miss., for a number of years, and one of the city's libraries is named for him.

I had no idea that Richard Wright wrote haiku! I love everything about the "Seeing Into Tomorrow" project! Hooray for poetry as public art. Your adventures around Brooklyn sound wonderful. I haven't been to the city since January 2020 and I do miss it. Maybe one day soon.

FOUR THOUSAND haiku! I have the 'Seeing Into Tomorrow" book and was intrigued by the selection and the purpose, but I would love to explore Wright's larger collection. Isn't the contrast of stone and humid earth exquisite? My daughter is newly in Brooklyn (15th & Prospect Park) so I love thinking about your explorations.

Catherine, isn't it wild about Richard Wright & haiku! I have found that people in the city are very good about wearing masks on public transportation, and most of the the trains & subways I've taken have had plenty of room. The only exception was a MetroNorth train full of Yankee fans headed to a game back in the summer.

Heidi, oh, how nice to live near Prospect Park! GoogleMaps was my friend on my trip to Brooklyn. It sent me into Fort Greene Park for a shortcut, and I'm so glad it did. A very pretty place. Somewhere in the park is a bench dedicated to Richard Wright, but I didn't find it.

So cool! I agree with Wright's daughter, haiku is a way to stay "spiritually afloat". I'm going to look for the books you mentioned. :)

Hi, Bridget! I am going to look for them, too. I was disappointed that the local library does not have a copy of the one for adults, but I hope to find it nearby. Thanks for visiting!

I love your photo of this haiku...where where it should be...out in public for everyone to see, read, think about in their day. I loved seeing poetry on the NYC subway when I was there. It felt so civilized. Thanks for the intro of Wright to me. I feel like I should know his work but I don't. I will find more!

Yes, exactly, Linda: it’s out for everyone to see & think about! That’s one of my favorite aspects of public art and street art. Prior to this Brooklyn excursion, I did not know much about Wright’s haiku either, so I look forward to seeing the book, too.

Thanks for taking us along with you on your traipse through Brooklyn as you followed Wright's haiku. What a grand adventure! I will confess, I knew his name and a few of his titles, but had no idea he wrote haiku. Sadly, no library in Maine seems to have a copy, but next time I indulge with a purchase, this book will be on my list. The examples shared by you and at the link to project are wonderful.

Ohmygosh, the public art project is an incredible idea. I love that. I didn't know he had written over 4,000 haiku. Staggering! I had no idea. I've added the book to my wish list and now I'm off to check out the picture book you linked to. And that door is gorgeous. :)
Thanks for this, Susan.

Molly, you're so welcome. Yes, my haiku adventure in Brooklyn! Does your library system ever borrow from other states? This summer I read an inter-library loan book that came to my CT library from New York State. I was surprised.

Karen, isn't this such a good idea for public art! I loved Richard Wright's old neighborhood, and was ready to move into one of those lovely buildings.

A powerful and scary haiku that makes us pause, and commentary too, thanks!

In a poetry class I've been taking, we talk a lot about juxtapositions, and this one is indeed so powerful. The haiku's placement near the roaring tracks of the subway trains—another juxtaposition—gives us readers much to think about, too. Thanks for reading, Michelle!