Where the sidewalk reads, in which I make a poem out of trash 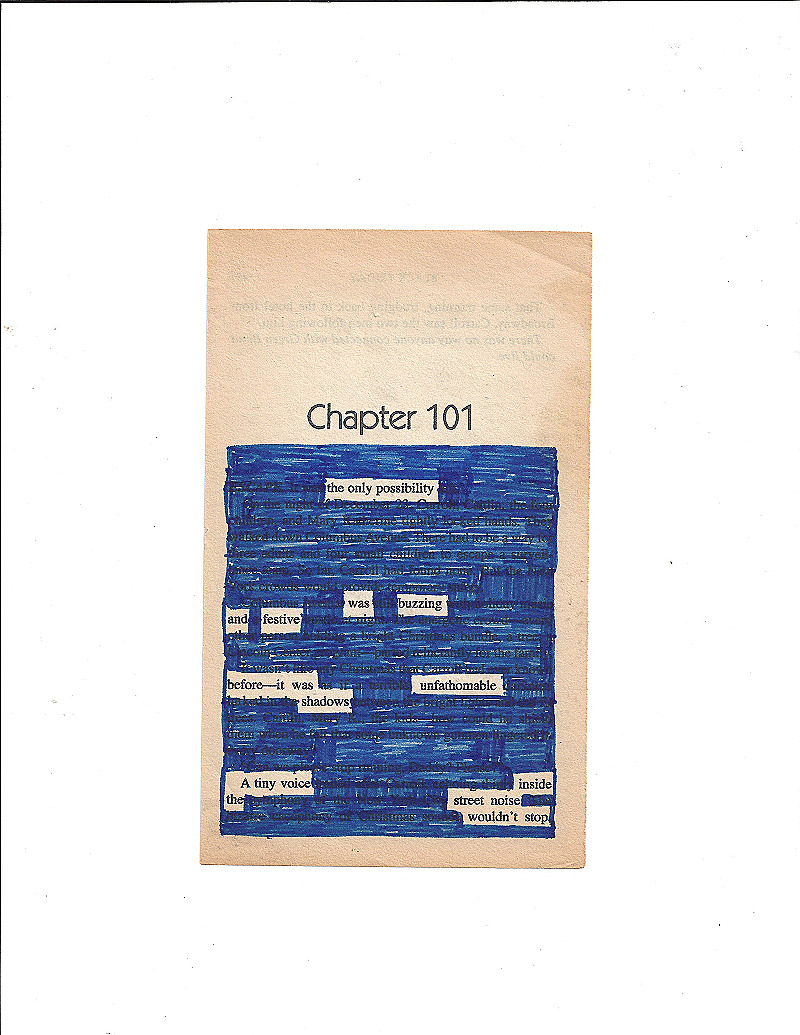 The only possibility was

inside the street noise

Spooky, right?  Above is a blackout poem, also called an erasure. I learned how to make this kind of thing from Austin Kleon's blog, and here, my source is a page of a paperback that had fallen apart; it was blowing around a sidewalk in New York. Before I made the "new" work, I had no idea which book Chapter 101 had come from, but after googling a chunk of the original text, I discovered it was a novel by James Patterson. It's either Black Market (1986) or a slightly rewritten version, Black Friday (2000). I vote for Black Market because the pages look old and foxed. The original Kirkus review said it's an "abysmally dumb terrorist novel whose plot would embarrass a Superman movie." Ouch. "Chapter 101" makes a fine title, though.

Updated to add: the Guardian just looked at erasure poetry, too. "Especially when challenging dust-thick prejudice and received opinion, it has the potential to be transformative." See "Blanked verse: the power of erasure poetry," by Carol Rumens.

Oh, WOW what a review! I don't care for James Patterson novels, but I can't say that even I'd be that... succinct... I LOVE your blackout poem, though! I should try a novel page; last time I did a nonfiction book, but you get much wilder topics with fiction, I think.

Tanita, I’d love to see what you create! Let me know. That review minces no words…

Well, at least something great came out of the novel, ha! Love this - eerie and thought-provoking.

It is fun to read what comes "buzzing and festive", better than the review you found!

I LOVE that your found poem was make on a page from a found book! Chapter 101 is a fantastic title.

I'm getting ready to start a blackout poem project that uses fabric and thread. Stay tuned!

That's so cool! Finding a book page blowing around and turning into a poem...perfect for a Poetry Friday share. And, I love that you were able to narrow down what book it is. Isn't it amazing what we can do with a few keystrokes these days? A gem, for sure.

I agree that you have found something good in Mr. Patterson's work. He might be thinking that novel is long forgotten!

Matt, thanks for stopping by and for hosting the Poetry Friday roundup! It's a deadline that gets me writing every week.

Linda B., it was a fun find. That review! Ooof. I doubt it affected sales, though.

Mary Lee, I can't WAIT to see what you're doing. Perhaps I've seen a glimpse on Instagram?

Linda M., it is indeed so crazy that I can google and find the book in seconds. From what I read, I thought it was perhaps a mystery written for children. I was surprised it was Patterson.

Janice, ha! Slate said, "As the scrappy runner-up to PW, Kirkus has long had a reputation for lively, unpredictable reviews that are sometimes outlandishly harsh." Yep!

I have long been a fan of black out poetry and erasure poetry. Austin Kleon (great name) set me on my way and I remain ever grateful. Love that you found your words out on the streets of NYC. You have re-energized the words with your considered choices. Well done Susan.

Alan, yes, I am so grateful to Austin Kleon, too! Thanks for dropping by.

Susan, you made magic with the first page of Chapter 101. What a fun post! I love "the only possibility was buzzing and festive." I love how found poems find unusual combinations of words. It's an intriguing phrase and poem.

Denise, thank you for your kind words! The book might not have been reviewed well, but I found plenty to work with. I like the surprise of found poems, too. As you're saying, the combinations of words are intriguing--and usually not even close to something I would have come up with on my own.

I love erasure poetry. This is brilliant.

Jone, thank you! Isn't erasure poetry fun to work on? I am fascinated by it. A super cool one (and heartbreaking) is Nicole Sealey's "'Pages 1-4,' an excerpt from The Ferguson Report: An Erasure." https://poets.org/poem/pages-1-4-excerpt-ferguson-report-erasure