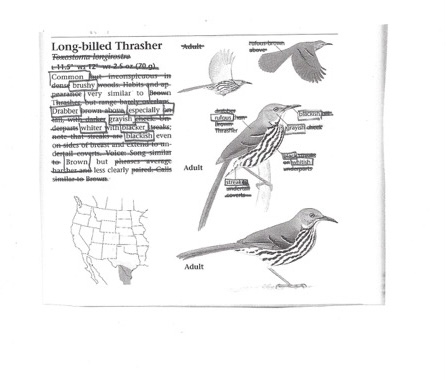 Method: I photocopied a random page of a field guide to birds, and concocted the blackout poem above. The last two lines often characterize my experience of bird watching, especially during the busy spring. I've seen the Long-billed Thrasher's Eastern cousin, the Brown Thrasher, but never the LBT itself. One day!

The Poetry Friday roundup for April 29th is at Jone Rush MacCulloch's blog. 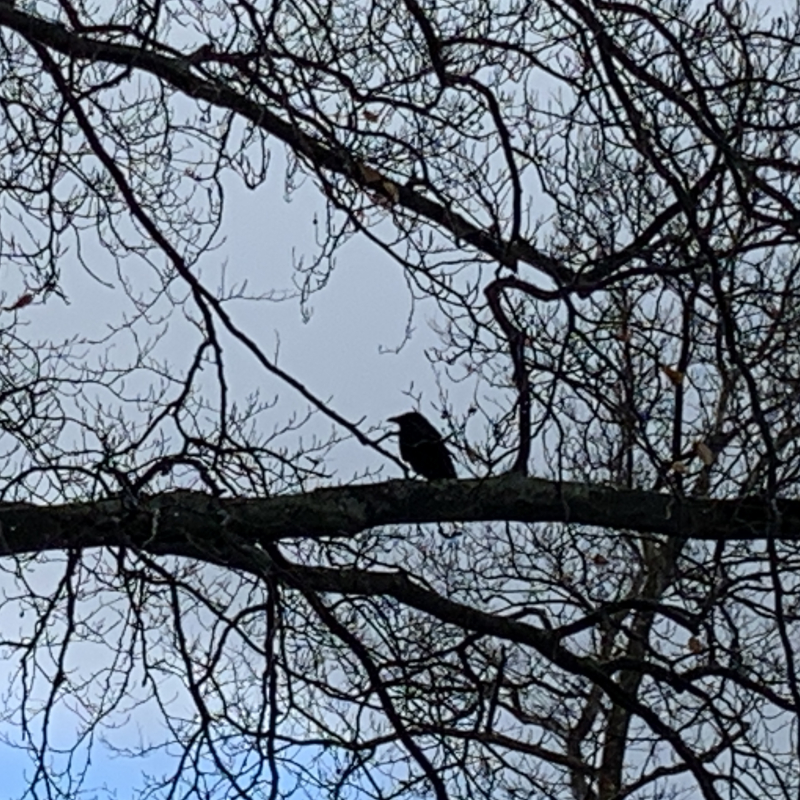 Book Review Cento: It Changes as the Day Does

With flowers standing on the balcony,

Heard a phoebe this morning—

You are in a beautiful language,

The subtle lilt in your speech,

A sound welling up through the throat,

Some flickers of nonsense remained,

With all we’ve been taught to hope for.

I’m coming to find you

In flight from the land,

Where does the rainbow end,

in your soul or on the horizon?

Last Sunday (4.17.22), the entire New York Times Book Review was devoted to poetry. I created the cento above with lines quoted in various reviews and poems. The issue is a beautifully curated selection of new poetry, plus a few recently re-published older works.

The Poetry Friday roundup is at Margaret Simon's blog, Reflections on the Teche.

Cento Sources: The New York Times Book Review (April 17, 2022). Title from Vinegar Hill, by Colm Toibin; 1. Woman, Eat Me Whole, by Ama Asantewa Diaka; 2. “In that life I would have dwelt,” by Yuri Burjak (translated from the Ukrainian by Nikolai Scherbak and Fiona Sampson); 3. Rapture and Melancholy: The Diaries of Edna St. Vincent Millay (edited by Daniel Mark Epstein); 4. Best Barbarian, by Roger Reeves; 5. Madness, by Gabriel Ojeda-Sagué; 6. Now Do You Know Where You Are, by Dana Levin; 7. Continuous Creation, by Les Murray; 8. “The Convergence of the Twain—Lines on the Loss of the Titanic,” by Thomas Hardy; 9. Canopy, by Linda Gregerson; 10. Venice, by Ange Mlinko; 11. Cicada, by Phoebe Giannisi (translated from the Greek by Brian Sneeden); 12. Flight and Metamorphosis, by Nelly Sachs (translated from the German by Joshua Weiner with Linda B. Parshall); 13-14. Book of Questions, by Pablo Neruda (translated from the Spanish by Sara Lissa Paulson)

Photo: A shout-out to "The Raven" by Edgar Allan Poe, with a fish crow playing the part of the raven. 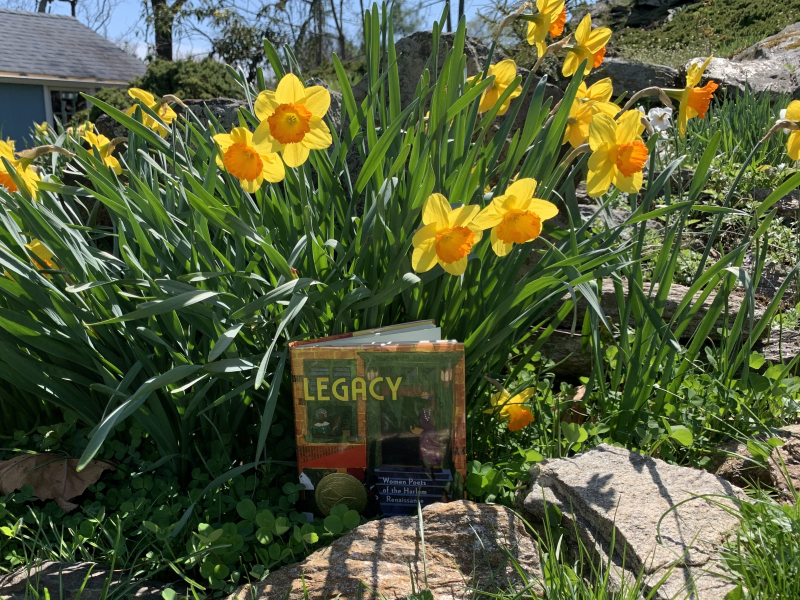 You can read the rest at the Poetry Foundation.

"Rondeau" was one of my favorite poems in the book Legacy: Women Poets of the Harlem Renaissance, by Nikki Grimes (Bloomsbury Books for Children, 2021). Grimes writes, "It should come as no surprise...that the names of gifted, even prolific women poets of the Harlem Renaissance are little known, especially as compared to their male counterparts." She anthologizes a number of works from that historic period, plus she includes poems of her own inspired by those of Fauset, Anne Spencer, Ida Rowland, and others. It's a gem of a book, beautifully illustrated by contemporary Black women artists.

In her role as literary editor of The Crisis (the official publication of the NAACP), Jessie Redmon Fauset (1882-1961), published Langston Hughes's "The Negro Speaks of Rivers," among other important poems. Morgan Jerkins writes in the New Yorker, "though [Fauset] helped to usher in a crucial period of artistic flourishing, and was herself a vital participant in that flourishing, she was not destined to get much credit for it." (Jerkins' fascinating piece can be found here.) I really like Grimes' idea of getting the word out to younger people about the women of the Harlem Renaissance; the rest of us readers benefit, too.

The Poetry Friday roundup for April 14, 2022, is at Matt Forrest Esenwine's blog. See you there!

Go, Go, Grapes! by the late April Pulley Sayre was my pick (ha!) of the week for one of the classes where I volunteer. Subtitled "A Fruit Chant," it's a lot of fun to read aloud: "Rah, rah, raspberries! Go, go, grapes!/Savor the flavors. Find fruity shapes!" Each page has a large photo of delicious-looking fruit, and, as you can tell, the text is really a poem of rhyming couplets.

This particular group, a smaller combined class of K-2 kiddos, shares complements freely. One friend told me, "Nice job, Miss Susan," when I finished reading. The children enjoyed trying to remember all the different kinds mentioned, and I asked them what their favorite fruit was. "Ice cream!" replied another friend. "Oh, ice cream is delicious," I said. "But what about fruit?" After insisting again on ice cream, he eventually admitted to raspberries.

So, a poem of a book for a Friday during National Poetry Month. I recommend it!

Photo by Tomás Castelazo, from Wikimedia Commons. This file is licensed under the Creative Commons Attribution-Share Alike 2.5 Generic license. 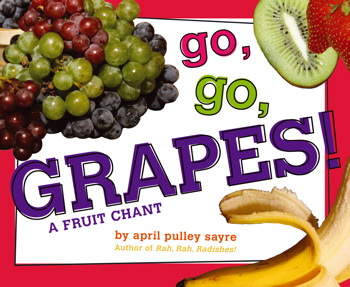 Isn't this poem fun? With the start of National Poetry Month and the government's release of the 1950s census happening on the same day, the Center for Brooklyn History offered a fitting poem to address both! The poet is Edgar H. Ryniker, a member of the Brooklyn Poetry Circle.