Bored with the Bs, Charles Bukowski

bopped down a few shelves to

between her Handbook and the

at a bar on Saturday night.

“I want to drink wine with

the assassins,” he said

by way of introduction.

expressed no interest in the con-

But there he remained,

more than a week.

Anyone seeking his fix of

gannets and the whelks

“I would kill an elephant

with a bowie knife,”

his direction: “Wild and fickle

and fierce is he!”

sought an escape, or

at least a return to

than it has been for decades,”

she declared, only to hear

“I’ve been bombed out of

better places than this.”

leaned over to yell,

“I know you are dangerous.

I see it in your shiny teeth,”

She sensed a shadow—

“In the past couple decades,

we had a long-standing rule of

Origin story: Someone had put Bukowski’s Storm for the Living and the Dead in the middle of the Mary Oliver books at the local Barnes & Noble, and I thought it was a funny poetry in-joke. After taking a photo, I decided to write a poem that brought together the two wildly popular and wildly different authors along with some of their shelf mates.

“The kale’s puckered sleeve,” and “turnip-hearted skunk cabbage” are phrases from Mary Oliver’s New and Selected Poems: Volume One; “Such Silence,” “Gannets,” “Whelks,” “Poppies,” and “At Blackwater Pond” are titles of poems. “Such Silence” actually comes from Oliver’s Blue Horses, not the New and Selected.

The Bukowski verses are from Storm for the Living and the Dead. Meghan O’Rourke’s quote is from her collection Sun in Days, and Aimee Nezhukumatathil’s is from Oceanic. The Dorothy Parker line can be found in Enough Rope: A Book of Light Verse. The bookseller’s words belong to Annie Metcalf, who was quoted in a 2017 article in Electric Lit.

Head over to author Tanita S. Davis's site for the Poetry Friday roundup on August 26th. 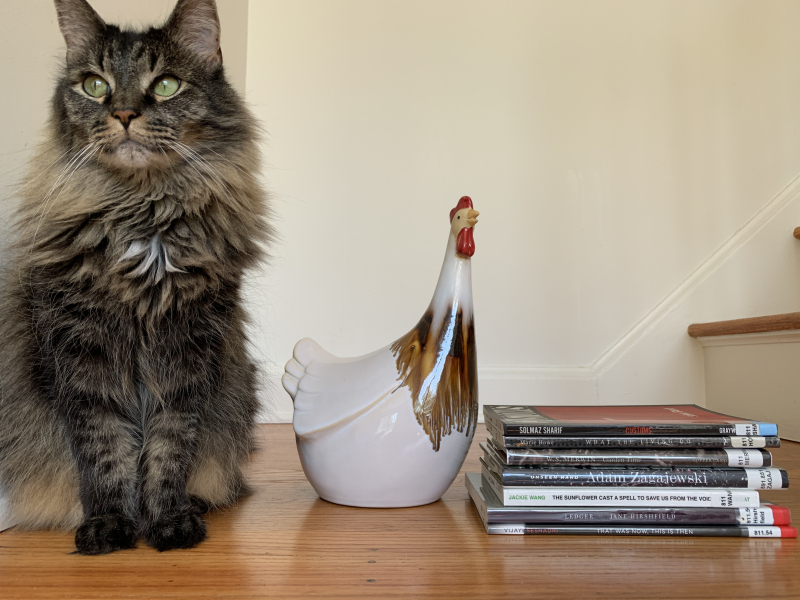 For everyone participating in the Sealey Challenge, how's it going? I am behind! But I am reading poetry every day, which has been grand. Use the hashtag #TheSealeyChallenge to find recommendations on Twitter and Instagram.

I had really looked forward to catching up with the work of Kamilah Aisha Moon, and I was not disappointed at all! Her book Starshine & Clay was poignant, heartbreaking, beautifully crafted. Knowing that Moon had passed away in 2021 made finishing this library copy hard because I wanted to stay in the poet's company. I'll buy my own Starshine & Clay (Four Way Books, 2017), as well as an earlier work, She Has a Name (Four Way, 2013). One of Moon's "literary North Stars," as she wrote in Mentor and Muse, was Lucille Clifton, so I want to go back to her work as well. Here's a good place to shout out Clifton's Generations, a spare & lyrical memoir recently reissued by New York Review Books; I read it earlier this year.

My current book is Jane Hirshfield's Ledger (Knopf, 2020). The Poetry Foundation says, "In recent decades, Hirshfield has become increasingly known as a poet working at the intersection of poetry, the sciences, and the crisis of the biosphere," and I know that Ledger will appeal to many of my Poetry Friday peeps. So far my favorite poem is "Today, Another Universe," which you can read on Maria Popova's site, The Marginalian.

The Poetry Friday roundup takes place at the blog Leap of Dave on August 19th.

Photo by ST: Kimchi the cat with a new stack of books for #TheSealeyChallenge