This week J. (my 12-year-old son) and I finished the audiobook version of Harry Potter and the Deathly Hallows, the final book in J.K. Rowling's epic series. We started listening to the first one in September 2010. J. was just starting sixth grade at a new school, and, until then, J. would have nothing to do with the series whatsoever. (Occasionally, and unfortunately, people become competitive about who has read what, and the same holds true even in elementary school.) I had read only the first book, and was neither here nor there about it. But the audiobooks! We became complete converts to the series and to Jim Dale's fabulous narration. Some evenings we sat in the car in the driveway, just to hear what would happen next, and I almost cried exiting I-95 as the last book came to an end. J. has read the books many times over, while I read ahead only once, preferring to be surprised.

As the HPs got longer and longer, I did need a break between 5 and 6. We listened to and enjoyed When You Reach Me, Rebecca Stead's Newbery-winning novel, although I have to admit that I am thick-headed when it comes to understanding time travel. I loved the New York setting and could completely picture those kids working in the sandwich shop.

Now we're onto a classic, Charlotte's Web, read by its author, E.B. White. Isn't that so cool that you can still hear E.B. White's voice? Out of nowhere J. remarked, "This is a good book." High praise!

My friend Mary Parmelee at the Westport Library says Eva Ibbotson's One Dog and His Boy, read by Steve West, is one of the best audiobooks she's ever heard. Now that we're dog owners, this novel sounds perfect. The online card catalogue summarizes the story this way, "When lonely, ten-year-old Hal learns that his wealthy but neglectful parents only rented Fleck, the dog he always wanted, he and new friend Pippa take Fleck and four other dogs from the rental agency on a trek from London to Scotland, where Hal's grandparents live." I'm putting it on the list now.

Correction: An earlier version of this post had the wrong last name for Rebecca Stead, author of When You Reach Me. My apologies.

Mangia, Mangia: Some Books About Food

I was happy to guest blog recently at Gourmandistan, the excellent site run by my pals Michelle and Steve. Michelle and I have been friends since college. While I was arranging Vienna sausages on white bread for what another chum termed "toe sandwiches," Michelle was whipping up coq au vin and other delicious fare. I hope you'll stop by Gourmandistan and check out Michelle's beautiful photography, too.

At Gourmandistan I wrote about some favorite food books—for adults. Here are some kids' selections on the same subject which I've really liked.

Blueberries for Sal, a picture book by Robert McCloskey (Viking, 1948)

The Giant Zucchini, an easy reader by Catherine Siracusa (Hyperion, 1993)

The Little Red Hen, a picture book by Paul Galdone (Clarion, 1973). A new edition from Houghton Mifflin came out earlier this year.

The Little Red Hen Makes a Pizza,  a picture book written by Philemon Sturges and illustrated by Amy Waldrop (Dutton, 1999)

To Market, To Market, a picture book written by Anne Miranda and illustrated by Janet Stevens (Harcourt Brace, 1997)

Too Many Pumpkins, a picture book written by Linda White and illustrated by Meghan Lloyd (Holiday House, 1996)

The Ugly Vegetables, a picture book by Grace Lin (Charlesbridge, 1999)

The Art of The Georges and the Jewels

As a former horseback rider and a forever Misty of Chincoteague fan, I enjoyed reading The Georges and the Jewels, author Jane Smiley's first book for children. The middle-grade novel centers on Abby, a girl growing up on a California horse ranch in the 1960s. Aged twelve in this first of three books, Abby is less than thrilled with school—seventh grade and its attendant social conflicts—but, boy, can she ride!

Recently I was chatting with my friend Elaine Clayton, who did the fine pen-and-ink illustrations for The Georges and the Jewels. (In fact, she had lent me the review copy.) As she described the process of creating the art for the book, I knew that others would like hearing about it, too. I invited Elaine to write a guest column, and am so happy that she agreed to.

Without further ado, I turn things over to Elaine Clayton: 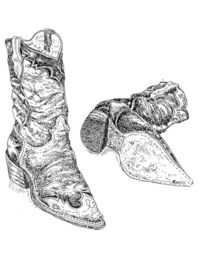 When I was asked by the art director at Knopf/Crown Books for Young Readers to illustrate Jane Smiley's first book for young readers, I was completely thrilled. I have illustrated many chapter books and novels for other authors, and find it to be a lot of fun. When I was told this book was about horses, I was even more thrilled. I created a horsey picture book published a few years ago called A Blue Ribbon for Sugar. The art is very gestural, the drawings of horses loose and free-flowing. I used pencil and water color. However, when I was told that Jane Smiley's novel would be pitched for slightly older readers and they'd need me to illustrate the horse equipment (and not illustrate the story), I realized this was a different kind of illustration project.

Normally, when illustrating a book someone else has written, I read the manuscript, and as I read, cinematic imagery develops in my mind instantly. I see the characters, see their world, feel myself in the story. I make notes and then go and make many, many sketches and try and be as true as ever to the author's description as I allow my inner vision of the character to emerge on paper. It is a wonderful thing to comprehend the writing of another, and an honor. The honor in it demands that I handle carefully the feel and mood and detail the author has offered up, and then to be true to my way of understanding visually that author's bounty.

Continue reading "The Art of The Georges and the Jewels" »

Kazu Kibuishi, the creator of the Amulet graphic novels and other works, will sign books and talk about the artistic process on Saturday afternoon, September 12th, at Gallery Nucleus, in Alhambra, CA. Kibuishi will also read from Amulet 2, the latest installment. (See Kibuishi's site, Bolt City, for complete details.)

Kibuishi says on Twitter that he's working on #3. My son will be glad to hear that! I snagged him a copy of the first Amulet after reading about it at School Library Journal's blog Good Comics for Kids. Reviewer Robin Brenner wrote, "It's a great mix of classic fantasy combined with elements of manga and Saturday morning cartoons. And it has a walking robot castle—very cool imagery and a great start that should really become a classic for kids."

A gallery exhibit that opens later this month should be worth seeing, too: "Terrible Yellow Eyes," a group show of art inspired by Maurice Sendak's Where the Wild Things Are (September 19th-October 6th). The movie opens on October 16th, by the way.

Thanks to Gallery Nucleus for passing along the information. I wish we could go. Google Maps says the drive would take 1 day and 18 hours, straight-through. I did check, though.

A very happy Inauguration Day to everyone. Here is the Alvin Ailey American Dance Theater, one of the many, many cultural institutions and arts groups who helped pave the way for today. The group is performing its signature piece, "Revelations."

In August, Grace Lin, a children's book author and illustrator, lost her husband, Robert Mercer, to cancer. When he was diagnosed some years back, Robert and Grace were told that the best hope for his rare type of cancer lay in research. They went to work. Portions of the proceeds from Grace's picture book Robert's Snow went to the Dana-Farber Cancer Institute in Boston, and now each year many leading children's illustrators create snowflake ornaments for the Institute, which the public can bid on.

This year children's literature bloggers got involved, too. For the next month or so, many blogs are featuring snowflakes that you can buy. We'll link directly to Dana-Farber, which is managing the online auction  sales. (Bidding for the first group starts in November.) You can see this year's snowflakes and find out how to bid at http://www.jimmyfund.org/eve/event/roberts-snow/default.html

I am so excited to bid on some of the beautiful pieces of art! Won't you buy one, too?

MORE AFTER THE JUMP

Because of a never-ending stack of  books to be read, my family doesn't subscribe to any of the children's magazines, but perhaps we need to re-think that. Here is a great reason to seek out Ladybug Magazine : this illustration by Roz Fulcher,  at Rozzieland.   So cute. The picture will run in the June 2006 issue. And Rozzyland's banner! Also adorable.  I believe that the animal is a hedgehog, but it might take a subscription to Ranger Rick to make sure.

About the Chicken Artist

A huge shout-out to  Natalie, who created the Chicken Spaghetti chicken, on the right. Thank you! He's just the greatest. Chicken Spaghetti readers should know that Natalie, who's a painter and illustrator,  and a business partner have a line of personalized children's stationery, and it's wonderful! Do go see her work online. You'll want to order everything, and you can see which stores carry the line.  Click here, for  Ellie Mim's Social Stationery.

And if any of you editors are reading along, you'd be wise to seek out Natalie's portfolio; you can reach her through the Ellie Mim web site.