Comic-Con International, a huge annual comics-industry showcase, announced nominations for the Eisner awards recently. The following are the lists of books specifically for kids. There are many other categories. All winners are declared at Comic-Con in San Diego on July 23rd.

The Secret Science Alliance and the Copycat Crook, by Eleanor Davis (Bloomsbury)

My son can vouch for Lunch Lady, Tiny Tyrant, and The TOON Treasury, but I see we need to pick up The Secret Science Alliance (which also won a Cybils graphic novel award) and the Oz book, too. I may snag Charles Darwin's On the Origin of Species: A Graphic Adaptation, adapted by Michael Keller and Nicolle Rager Fuller (Rodale), which was nominated for Best Adaptation from Another Work; several comics cited in other areas will likely appeal to older kids.

Kazu Kibuishi, the creator of the Amulet graphic novels and other works, will sign books and talk about the artistic process on Saturday afternoon, September 12th, at Gallery Nucleus, in Alhambra, CA. Kibuishi will also read from Amulet 2, the latest installment. (See Kibuishi's site, Bolt City, for complete details.)

Kibuishi says on Twitter that he's working on #3. My son will be glad to hear that! I snagged him a copy of the first Amulet after reading about it at School Library Journal's blog Good Comics for Kids. Reviewer Robin Brenner wrote, "It's a great mix of classic fantasy combined with elements of manga and Saturday morning cartoons. And it has a walking robot castle—very cool imagery and a great start that should really become a classic for kids."

A gallery exhibit that opens later this month should be worth seeing, too: "Terrible Yellow Eyes," a group show of art inspired by Maurice Sendak's Where the Wild Things Are (September 19th-October 6th). The movie opens on October 16th, by the way.

Thanks to Gallery Nucleus for passing along the information. I wish we could go. Google Maps says the drive would take 1 day and 18 hours, straight-through. I did check, though.

School district tries out desks at which kids can stand; the New York Times reports. “We’re talking about furniture here,” [a grant-maker] said, “plain old furniture. If it’s that simple, if it turns out to have the positive impacts everyone hopes for, wouldn’t that be a wonderful thing?”

Keep an eye on this initiative:  Share a Story—Shape a Future. A group of bloggers is planning a series of interviews and articles focusing on literacy, with advice from keeping young readers engaged to using technology for read-alouds.

Scientists blog, too. (Doesn't everyone?) The first ever Diversity in Science blog carnival (or, wrap-up of links to blog posts) takes place at Urban Science Adventures! [via Living the Scientific Life (Scientist, Interrupted)]

Speaking of NPR, I am happy to hear that the NPR librarians have a blog—...as a matter of fact.

Speaking of comics, the blogger known as Tangognat spies some manga sure to be "just the thing for ninja-crazed reluctant readers."

Which brings us to "Snacktime," a goofy new kids' CD by Barenaked Ladies, which features a funny song about ninjas. The disc is my son's car music of choice these days.

"Show me a good mouser, and I'll show you a cat with bad breath."

December's Carnival of Children's Literature will showcase ideas for gift books, so here's an easy one: Garfield. And you don't even have to spend a lot of money, since collections of the grouchy fat-cat cartoons turn up frequently at thrift shops like Goodwill. The 8-year-old Garfield fan in my house thinks the cheeky feline is hilarious and quotes from the books often—plus, he has developed a love of lasagna, a Garfield staple. (Our copies cost 50 cents apiece at a library sale.)

Capable young readers who aren't that into chapter books yet will be thrilled to see Garfield under the Christmas tree. If you do decide to pay full price, check the humor section of your favorite bookstore.

Additional Garfield quotations, such as the one I used as the title's post, as well as e-cards and more, can be found at Garfield.com. The comic strip turns 30 in 2008. 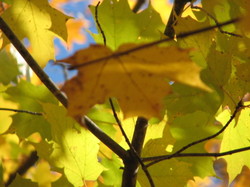 Junior has never been one to divulge a lot of details about school. Days are usually "fine" or "okay," and that's that. We asked him what he reads for silent reading time at school and were told, "Mysteries." When asked to elaborate, he said, "I read my mysteries." We have no idea what he's talking about. Try and pursue the line of conversation and you get, "I read my mysteries. I told you that!" (No doubt the parent-teacher conference will shed some light on the matter.) We do know that the teacher is reading Sewer Soup aloud to the class and that Junior thinks it's "good."

The third graders are required to read for 25 minutes each night, and Junior likes this part of his homework. He's fond of picture books and the comics genre in particular: Calvin & Hobbes, Babymouse, Owly, Garfield, the Sardine series. Although a capable reader, he avoids chapter books at home—which is why we asked him about what he reads at school. In order to encourage a little exploration in that area, I've been borrowing audiobooks from the public library, so he can read along with the narration.

Lately he and I have been listening to Avi's Poppy, which is about a deer-mouse family who lives under the rule of one Mr. Ocax, an owl and a "big meanie." Just yesterday we were visiting a local nature center, and one of the resident (and caged) owls started to clatter his beak at us, just like Mr. Ocax does when he's hungry. Spooky! Much to Junior's delight, we also saw plenty of owl pellets, the regurgitated parts of meals that owls cannot digest; Poppy is particularly appalled when she spots these near Mr. Ocax's perch. So, along with the good story line, Junior is picking up a bit of owl lore too. I enjoy seeing him make these connections. No mystery there.

Posted at 09:09 AM in Comics, Intermediate Readers | Permalink | Comments (9)

A Few Kids' Books from the Library

I haven't read any of these yet. Have you?

The critic James Wood is moving from The New Republic to The New Yorker, and many media outlets are making note of the literary switcheroo. Dwight Garner, who writes the New York Times' Paper Cuts blog, links to an interview of Wood at the Kenyon Review. (If you don't have Paper Cuts on your Google Reader or Bloglines, you're missing something good.)

Via Shaken & Stirred, I read the Atlantic's interview of Ann Patchett (Bel Canto) in which Patchett talks about her terrible experience at Clemson University when her memoir Truth & Beauty was chosen as the 2006 freshman group read selection. (Laila Lalami had a much better experience at the University of Tennessee with her short story collection, Hope and Other Dangerous Pursuits.) Truth & Beauty concerns Patchett's friendship with the late Lucy Grealy, the author of the highly recommended (by me) Autobiography of a Face. Patchett tells the Atlantic's Abigail Cutler,

Hands down, the most upsetting and distressing thing about the entire Clemson experience—more than Wingate, more than anything else—was seeing in action this idea that kids could be so rude to an adult, a guest of the university, on their very first day of school. That just blew my mind. I thought, “What kind of a society are we living in?”

Dave White attended Comic-Con 2007 for MSNBC. Several of his observations made me laugh, including, "Celebrity comic-book authorship is the somewhat-less-embarrassing alternative to writing a children’s book."

Multiple editions of the Garfield books, bought at a library sale.

A book of stories by Katherine Mansfield. Why did I ever say these were funny? Maybe one was, but the rest are not. Sure, she writes with humor on occasion, but there's a undercurrent of sadness, if not tragedy, that runs through the collection. I am reminded of both Chekhov and Edith Wharton. For grown-ups, by the way.

Once Around the Sun, by Bobbi Katz, a joyful picture book of poems about the months of the year. Love this book! Great for an early-elementary classroom or the home bookshelf. In LeUyen Pham's large, beautiful illustrations a young African American boy is the lead kid experiencing all the glory of the seasons. Winner of a 2007 "Growing Good Kids" award.

Japanese Children's Favorite Stories, compiled by Florence Sakade. A third edition of a 50-year-old collection of folk tales. Charming watercolor illustrations (by Yoshisuke Kurosaki) and good stories, including "Peach Boy," "The Magic Teakettle," and "Why the Jellyfish Has No Bones."

The Seaside Switch, by Kathleen V. Kudlinski. Nonfiction picture book about the changing tides. Right up our alley. Reviewed by Elaine Magliaro at Wild Rose Reader.

Shells! Shells! Shells!, written and illustrated by Nancy Elizabeth Wallace. A cheerful introduction to sea shells and mollusks. (There is no reason not to be cheerful when introducing mollusks; don't tell me otherwise.) Presented as a dialogue between mother and son Teddy bears on a beach walk, the book uses photographs and cut paper collage for the pictures. For children aged four to eight.

One Small Place by the Sea, by Barbara Brenner. This informative picture book about tide pools features vivid colorful pictures in a "scientific folk-art style," as the jacket flap says, by Tom Leonard. Although there are, at most, only five sentences per page, I still learned a few new things.

Lightship, by Brian Floca. Pen and ink and watercolors render life on a particular kind of ship, a kind of floating lighthouse, that is not in service any more. This picture book was reviewed by David Elzey at the excelsior file. David E. said it's "strangely compelling." I agree. (Am I the only one thinking Caldecott honor for this one?) David E. also wrote,

Very simply what Floca does is show us the bits and pieces that made up the routines of a crew aboard a lightship. While there is no story there is still a sense of being taken along for a tour with everything from the mundane oiling of the engine to the near-misses with larger ships in the fog.

D'Aulaires' Norse Gods and Giants (Doubleday, 1967). Stories of Odin, Loki, the Valkyries, Thor, et al. Junior refuses to have anything to do with this lovely old book (same with Harry Potter), so I am going to read it myself. A classic. (Note: In 2005 the New York Review Children's Collection reissued it as D'Aulaires' Book of Norse Myths.)